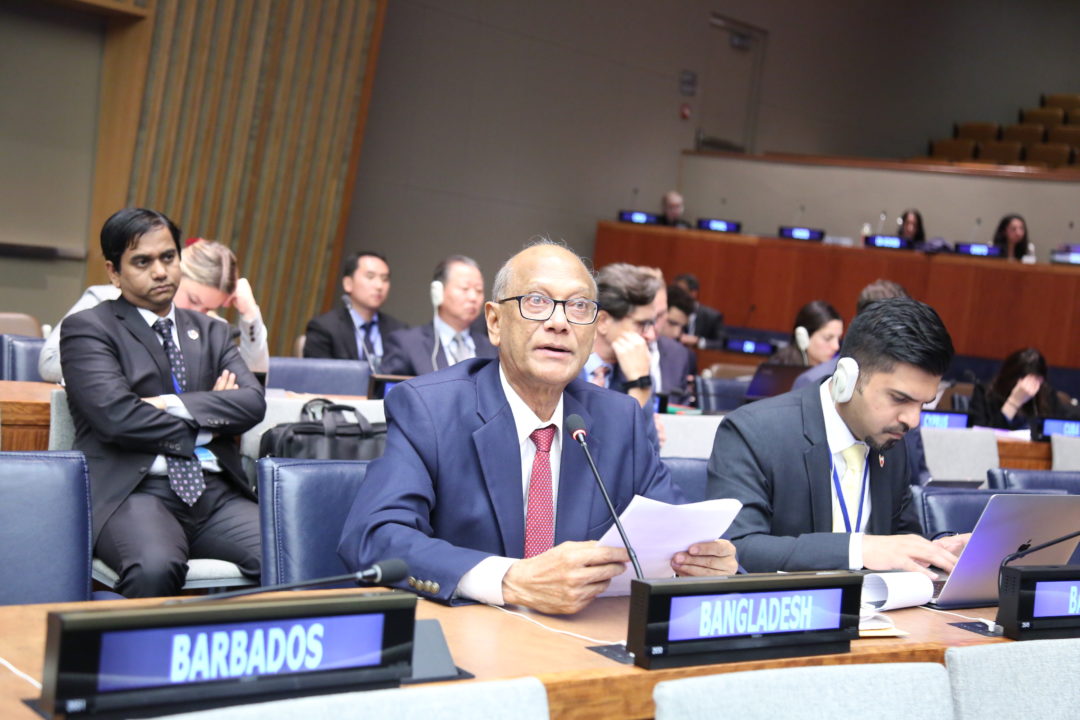 Today, at the UNHQs, Member of the Parliamentary Standing Committee on Ministry of Foreign Affairs Nurul Islam Nahid MP spoke on climate change & disaster management under the Plenary of the Second Committee and on disarmament issues under the General Debate of the First Committee of the 74th Session of the UN General Assembly.

In his statement, at the Second Committee, the MP urged for a greater political will across the globe to fast-track transformation to green economy, green technology, and a green planet. “We have heard the call of urgency from our leaders to mobilize real actions to halt climate change in the recently held Climate Action Summit”, he stated.

Referring the Fifth Assessment Report (AR5) of the IPCC where Bangladesh has been put among the countries that will be severely facing climate change impacts, Nurul Islam Nahid MP said, “Our vulnerability to climate change has made us more determined to face this challenge. We have mainstreamed climate actions and disaster management in our national planning and sustainable development strategy”.

Nurul Islam Nahid MP mentioned some of Bangladesh’s initiatives such as solar energy production, coastal polders, cyclone and flood shelters, community-based disaster preparedness, the raising of roads and highways above flood level, invention of several salinity and drought-resistant crop varieties, the conservation of the Sundarbans and the mega project titled Delta Plan 2100 to combat the negative impacts of climate change and disasters. “We are also going to host an office of the Global Commission on Adaptation”, the MP informed.

On disarmament issues, the MP said that the international community must redouble its efforts to further strengthen all the disarmament and arms control regimes to ensure a safer and better world for the future generations.

He quoted from the Father of the Nation Bangabandhu Sheikh Mujibur Rahman’s maiden speech in the UN where Bangabandhu stressed, “Relaxation of tension, limitation of armaments and the promotion of peaceful coexistence in every part of the world”. Inspired by these principles, Bangladesh never hesitated to assume higher responsibilities under all major multilateral disarmament treaties, he added.

In the context of Rooppur Nuclear Power Plant, the MP said, “We are following the highest international standards”. He stressed the inalienable rights of all member states to use the nuclear energy for peaceful purposes.

The MP also urged all concerned to work towards as international legally binding instruments for preventing weaponization in the outer space. He said that Bangladesh now is a stakeholder in preventing arms race in the outer space due to the launching of its first satellite into the space –the Bangabandhu-1.

PrevPreviousBangladesh tables a new resolution at the UN on the use of natural fibers including jute
NextBangladesh deeply feels the pain of peoples under foreign occupation and colonial subjugation -Abdul Majid Khan MP at the UNNext
© 2023 Permanent Mission of the People’s Republic of Bangladesh to the United NationsDiplomat Centre • 820 2nd Avenue, 4th Floor • New York, NY 10017 • USA • (212) 867-3434
Facebook-f Twitter Youtube