Statement by Mr. Md. Monwar Hossain, Deputy Permanent Representative of Bangladesh to the United Nations in New York at the general debate of the Sixth Committee on “Measures to eliminate international terrorism”, 03 October 2022, Trusteeship Council 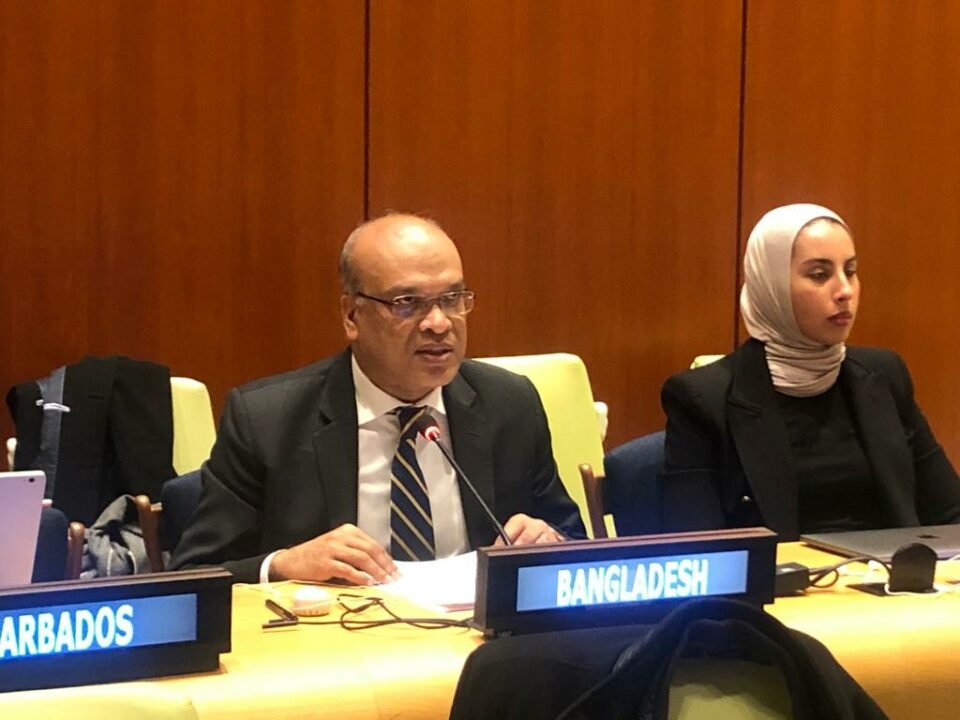 I warmly congratulate you and other members of the Bureau on your election.  You can count on my delegation’s full support and cooperation for a productive session.

Bangladesh aligns itself with the statements made in behalf of OIC and NAM. I thank the Secretary General for his report under this agenda item.

Bangladesh maintains a stringent policy of ‘zero tolerance’ towards terrorism and violent extremism. We have encountered acts of terror on a few occasions. However, the strong determination and unflinching commitment of Prime Minister Sheikh Hasina, and timely action, helped us to launch a nation-wide movement to fight the menace of terrorism.

We are party to all international counter-terrorism instruments. We have also joined a number of related regional initiatives in order to combat terrorism, violent extremism and financing of terrorism. Our government has made it clear that our territory would not be allowed to be used by any operatives to incite or cause terrorist acts or harm to our neighbors. We also maintain an unequivocal stand that a terrorist is a terrorist, who must not be identified by or associated with any religion, belief, caste or creed in relation to the acts of terrorism.

Bangladesh works closely with the relevant UN entities including UNOCT and UNCTED, our bilateral partners, as well as, civil society organizations in strengthening our response to the threats of terrorism and violent extremism. We have also been working closely with the Global Community Engagement and Resilience Fund to engage and empower community based organizations in prevention of radicalization.

Terrorism does not respect national borders. Therefore, we have to act together to eliminate the menace. I wish to make a few points in this regard:

First, The UN should lead and steer the global discourse and action in a more robust and coordinated manner, taking into account the local context and needs of Member States and in close coordination with national government and relevant stakeholders. Furthermore, as the apex global norm setting body, we wish to see the UN making definitive progress in the work of developing a comprehensive convention on terrorism based on convergences on the underlying causes of terrorism and violent extremism.

Second, terrorism cannot be seen from a mere operational perspective. Rather we must identify the root causes and invest in their elimination. Poverty, inequalities and other development challenges must be eliminated. At the same time, we must also look into the factors that foment grievances, exclusion and ideological misgivings and eventually lead to association of individuals, especially the youth, with terrorist or extremist organizations. Strengthening democratic values and rule of law at national and international level is imperative in this regard.

Third, capacity and technology gaps are one of the major obstacles faced by many member states in complying with the provisions set forth in the United Nations Global Counter Terrorism Strategy and Security Council Resolution 1373. The UN’s leadership in forging partnership in developing legal and policy frameworks in member states as well as in implementing the national and international regulations against terrorism is critical.  In addition to the seamless exchange of information among member states, investment in prevention strategy, developing national information and communication toolkit, access to global financial support are also important priorities for us in our counter-terrorism efforts.

Fifth, like any other security phenomenon, terrorism also has a disproportionate impact on women. Women are often forced to act as recruiters. They are also subjected to sexual violence in captivity by the terrorist groups. In order to prevent this, we must promote gender equality and empowerment of women in all aspects including security discourses. We also call for implementation of WPS agenda, including Security Council resolution 2242.

In this regard, I am happy to highlight that in Bangladesh, we have adopted a National Action Plan on Women Peace and Security which has recognized women’s particular role in countering terrorism and preventing violent extremism, and has included specific action points in this regard.

Sixth, upholding the rights and needs of the victims of terrorism is a critical part of the global counter terrorism efforts. International support for victims of terrorism must receive priority attention. In this regard, we thank the UNOCT for convening the First UN Global Congress of Victims of Terrorism on 08-09 September 2022 at the United Nations Headquarters. The Congress allowed the audience to learn about good practices undertaken by Member States and civil society organizations, while ensuring that victims’ voices were heard and that their experiences help shape the way forward in their own countries and across borders.

Finally, respect for human rights and due process of law must remain at the centre of all counter-terrorism and prevention efforts and should not be compromised in any circumstances. Use of information technology as well as other modern tools in tracing and identifying potential terrorists as well as in investigation can help maintain such standards. In this regard, capacity building and international cooperation including in the field of information communications technology have no alternative.

Let me conclude by reiterating my country’s abiding commitment to remain a strong and reliable partner of all international efforts to counter terrorism in all its forms and manifestations.

I thank you Mr. Chair.