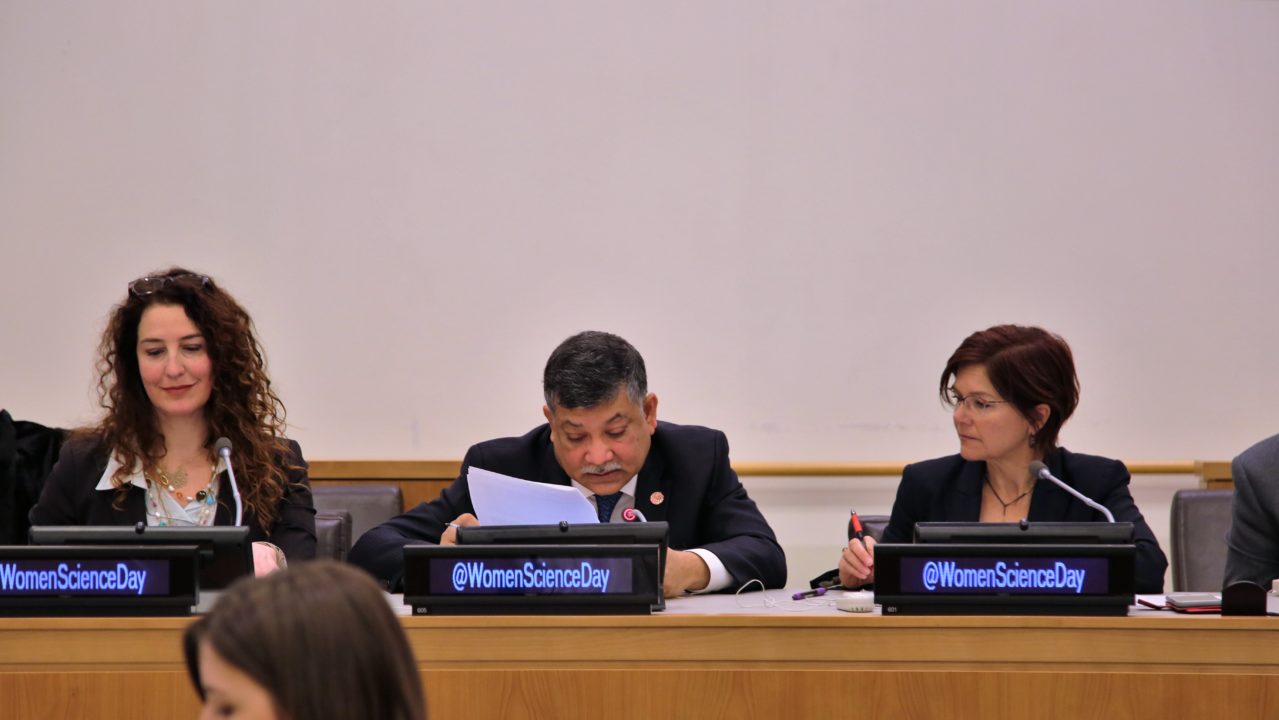 Today, the UN Member States, NGOs and civil society together with UN system have celebrated the International Day for Women and Girls in Science. The Permanent Representative (PR) of Bangladesh Ambassador Masud Bin Momen attended the inaugural session in the morning. He made opening remarks at the first panel titled ‘Assessment of Investment in Women and Girls for Inclusive Green Growth’ where he advocated for creating more opportunities for girls and women in science.

In his remarks, Ambassador Masud highlighted how Bangladesh, under the visionary leadership of our Prime Minister Sheikh Hasina, has become a role model in women empowerment. ‘With our high school enrollment ratio in particular for girls, we are making steady progress over the past decade in increasing share of girls and women participation in scientific field. Women have achieved near parity in college education, and in some cases outmatched their male peers, for example in medicine and life sciences. There is still, however, gender inequality in research domains. To overcome this inequality, our updated National Science and Technology Policy ensures application of science, technology and innovation (ST&I) for achieving sustainable economic growth with due attention to employment generation, gender equity and environmental sustainability’. The PR also outlined some of the obstacles and limitations that hinder women and girls in taking up more prominent role in science and research.

Through a consensus resolution 70/212 on 22 December 2015, the General Assembly proclaimed 11 February of each year as the International Day of Women and Girls in Science. The event has been celebrated since 2016. Every year, the Royal Academy of Science International Trust (RASIT) led by Princess Nisreen El-Hashemite works with Member States and other entities in holding a forum to commemorate this event. Last year, at the 3rd International Day of Women and Girls in Science, Bangladesh joined 23 Member States to sign an outcome document titled “Equality and Parity in Science for Peace and Development”.

This year Bangladesh jointly organized the 4thInternational forum with the Mission of Slovak Republic, Hungary and Poland together with RASIT, UNCTAD and ITU. African Union, Organisation Internationale De La Francophonie, ILO, WHO, WIPO and UNITAR as well as Permanent Missions of Cyprus, Guatemala, Haiti, Kenya, Poland, San Marino, Saint Vincent and the Grenadines, the Philippines, Tonga, Viet Nam, Uruguay and Zambia joined as co-sponsors. The Minister for European Affairs and Equality of the Republic of Malta, Dr Helena Dalli also graced the occasion.

Both the UN Secretary-General and President of the 73rd GA sent video messages on the occasion. The two day-long event will conclude with a closing session tomorrow afternoon where the Member States are expected to endorse this year’s outcome document titled “Investment in Women and Girls in Science for Inclusive Green Growth”.

PrevPreviousUNICEF’s Executive Board’s meeting at the UN • Bangladesh has been elected as a member and Vice President of the Executive board • Ambassador Masud focused the success of Sheikh Hasina’s government’s in protecting and promoting the child rights
Next“Inspired by the foreign policy of our Father of the Nation, Bangladesh has been taking a value-driven approach to the UN peacekeeping operation” –Ambassador Masud Bin at the UNNext
© 2023 Permanent Mission of the People’s Republic of Bangladesh to the United NationsDiplomat Centre • 820 2nd Avenue, 4th Floor • New York, NY 10017 • USA • (212) 867-3434
Facebook-f Twitter Youtube