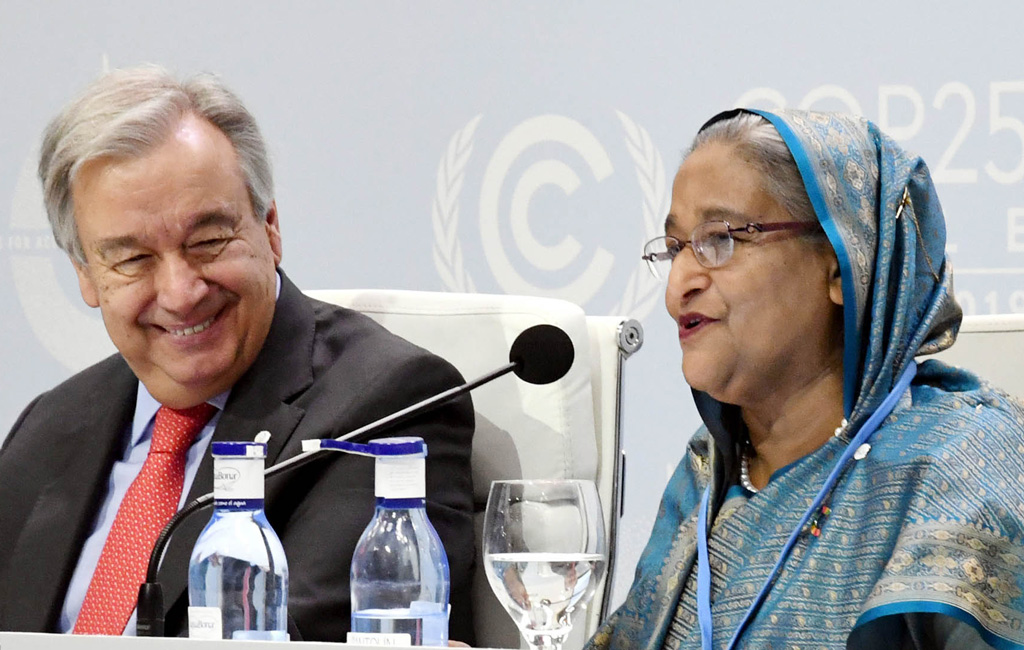 Bangladesh is one of the worst affected countries by the impacts of global climate change due to its geographical location and is highly prone to natural disasters such as cyclone, flood, landslide and earthquake. Climate change poses an existential threat to our 160 million people, although we had hardly contributed to the deterioration of the environment. Just 1-degree centigrade increase of global temperature and further sea level rise will result into inundation of a large area of Bangladesh and thus displacement of 40 Million people by the end of this century. 2% of our GDP is regularly lost due to natural calamities and environmental degradation. Climate change induced salinity and other disasters are harming our rice and other crop production significantly. In addition to all these, we have been hosting 1.1 million Rohingyas forcibly displaced from the neighbouring Myanmar. This phenomenon has also impacting our environment severely.

Disasters induced by global climate change have the potential to turn out to be major security concerns. The findings of the IPCC Special Report on Global Warning of 1.5 degree Celsius warn us about the dangerous consequences that would follow particularly in the areas of poverty eradication, food security and public health if we fail to limit the global warming to 1.5 degree Celsius. These would eventually lead to the break out of conflicts and ensuing events such as displacement of communities.

Adaptation and resilience building are our development priority. We have been working in all areas, such as policy framing and integration, institutional strengthening and collaboration, and effective implementation on the ground with the participation of local community.

We have Bangladesh Climate Change Strategy and Action Plan, National Disaster Management Plan and Act, Bangladesh Renewable Energy Policy, and other sectoral policies and strategies. Bangladesh put forward quantified emission reduction commitments through its NDCs. We have also developed NDC implementation roadmap together with sectoral mitigation action plans. However, mobilization of resources is critical in realizing its objectives.

Bangladesh’s National Parliament has passed a motion declaring climate change to be a ‘Planetary Emergency’ and called on the world to work on a war footing to combat it and reduce its impacts.

Over the last decade, we have been spending annually more than US$ 1 billion additional resources as part of our Annual Development Program to address climate change. We also created a dedicated Climate Change Trust Fund and allocated so far more than US$ 415 million to the fund from our own budgetary resources for the implementation of both adaptation and mitigation actions in line with Bangladesh Climate Change Strategy and Action Plan.

On mitigation, we have put increased emphasis on renewable energy, energy efficiency and energy conservation. Over the last few years, we have installed around six million solar home systems across the country and distributed around 4 million improved cook stoves in rural areas of the country. Bangladesh is committed to fulfill the announcement it made in 2014 UN Climate Summit that its carbon emissions will not exceed the average emissions of developing countries.

Finance is the key to all our efforts, be it adaptation, mitigation or technology transfer. Adequacy of resources to that of US$ 100 billion must be mobilized to effectively implement the Paris Agreement as well as the initiatives of Global Commission on Adaptation. In this respect we see a very crucial role of Green Climate Fund to make a true difference.

The halting of the global climate change and reduce disaster risks will largely depend on the implementation of the 2030 Agenda, the Paris Agreement and the Sendai Framework to their true letter and spirit. Hence, we must redouble our efforts for sustainable development. Bangladesh is of the firm view that climate change and related disasters must be discussed in the mold of international development cooperation. Providing financial resources and ensuring technology transfer to the vulnerable countries for their adaptation efforts would be the most effective response to the threats to international peace and security posed by climate change and related disasters.

Bangladesh believes that the principles of Common but Differentiated Responsibilities and Respective Capabilities must be respected, and collective efforts and innovative solutions are required to protect the environment and fight climate change. We are also committed to the implementation of the Paris Agreement and other existing environmental agreements. Bangladesh is now finalizing the National Implementation Plan for implementing our Nationally Determined Contributions (NDCs).

At the global level, Bangladesh attaches high importance to remain engaged in the global negotiations on climate change. Hon’ble Prime Minister of Bangladesh Sheikh Hasina attended the COP 25 in Madrid. Bangladesh had taken up the Chairmanship of Climate Vulnerable Forum (CVF) from 2020. The process of establishing regional Climate Change Adaptation Centre in Bangladesh under Global Commission on Adaptation (GCA) is under way.

Bangladesh is concerned that ambition could not be raised in COP 25 for mitigation of green house gases as big emitters did not agree to revise their current NDCs for a more ambitious one. It was also disappointing that countries could not agree on rules for “Article 6” regarding carbon markets and other forms of international cooperation. On Loss and Damage issue which is vital for the climate vulnerable developing countries, such as Bangladesh, the creation of the Santiago Network on Loss and Damage was a good outcome while not getting finance for it caused frustration. We are deeply concerned that there was no agreement on post 2020 climate finance or even on how the 100 billion dollars target would be met by 2020 as was previously agreed.

Climate Change, as a development challenge and also as a security concern, remains one of the most discussed topics in the UNHQs in New York. Permanent Mission of Bangladesh has been proactively engaged on climate change/environment issues and highlights its vulnerabilities to the climate change. This is one of the priority areas of the Secretary General who had convened a Climate Action Summit on 23 September 2019. Bangladesh was a partner country in the Summit’s Coalition on Adaptation and Resilience. Hon’ble Prime Minister Sheikh Hasina launched a multi-party initiative called Risk-Informed Early Action Plan (REAP) during the Climate Action Summit.