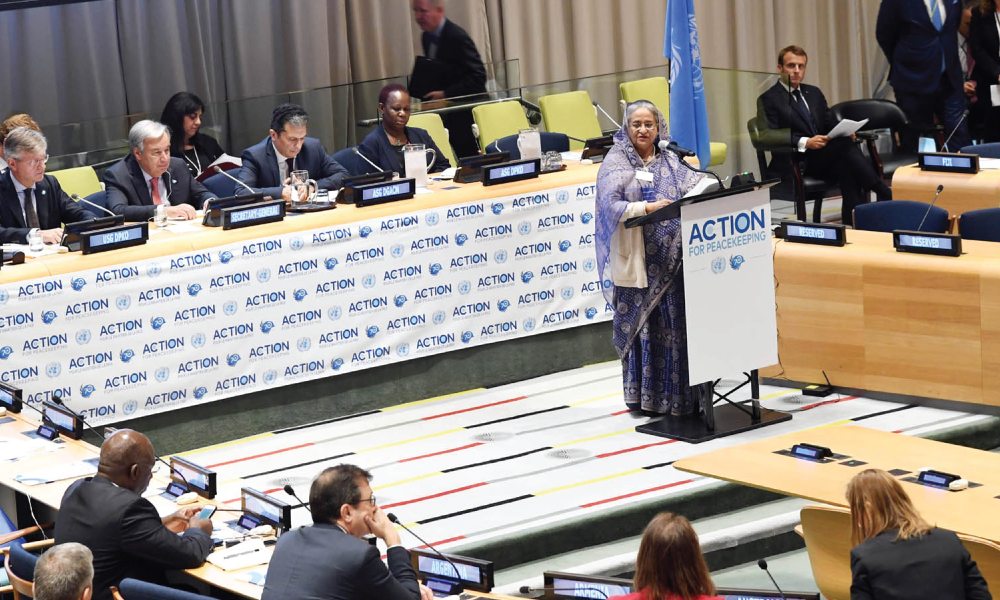 Bangladesh is one of the largest Troops and Police Contributing Countries ( TPCCs) to the UN Peacekeeping Operations. Over the last three decades, Bangladesh’s partnership with the UN in  peacekeeping  has grown in depth and dimensions. Inspired by  the Foreign Policy Doctrine of the Father of the Nation Bangabandhu Sheikh Mujibur Rahman, “Friendship to all and malice towards none” and  constitutional obligation, Bangladesh has taken a value-driven approach to contribute to global peace and stability. Hon’ble Prime Minister Sheikh Hasina has always remained a strong supporter of UN Peacekeeping Operations globally. During the Secretary General’s high-level event on Action for Peacekeeping (A4P) initiative on 26 September 2018, she said, “Many of our peacekeepers have lost their lives on the line of duty. Yet our resolve to serve has not been shaken”. Indeed, despite enormous challenges, Bangladeshi Peacekeepers have never faltered to carry out their responsibilities.

As regards the historic background of Bangladesh’s engagement in peacekeeping, Bangladesh first deployed troops  in UN Peacekeeping operations in 1988 in two separate operations namely UNIMOG in Iraq and UNTAG in Namibia. Since then Bangladesh became an integral part of global efforts to restore peace in the world. In 2018,  the journey reached its 30th year. As part of the celebration, the Bangladesh Permanent Mission to the UN hosted a high-level event at the UN Headquarters.  The UN Secretary-General Mr. António Guterres and the President of UN General Assembly Mr. Miroslav Lajčák  participated in the event along with high level dignitaries from Dhaka. They spoke highly of Bangladesh’s contribution to UN peacekeeping and highlighted Bangladesh’s impressive success stories in various other fields. In July, 2019, the Mission also co-hosted the Ice Breaking Session of the  Chiefs of Defence Meeting  at the UN Headquarters where Defence Chiefs of 64 countries took part.

The ever-evolving concepts of protection of civilian (POC) continues to add new challenges for  peacekeepers. For avoiding human casualties and particularly for safeguarding women and children, most of the UN field missions today are mandated with POC. Given the importance of the issue and high level of expectations in the field,  Bangladesh has added high priority  to this issue in the training curriculum of the peacekeepers .

Performance of the Bangladesh  peacekeepers has been well appreciated  in most difficult places including in Mali, Central African Republic, South Sudan and Democratic Republic of Congo. Bangladeshi peacekeepers are known for their pro-active operational measures, deep sense of commitment and excellent professionalism. They have also earned great reputation for having no caveats and their adherence to UN chain of command.

The UN is encouraging to deploy more female peacekeepers in the UN peacekeeping missions. Bangladesh has good representation of female peacekeepers in the all-female Formed Police Units (FPU) both in Democratic Republic of Congo and Haiti. However, we have low representation of female individual peacekeepers (as observer’s/staff officers). Our Armed Forces Division and Police Headquarters are taking measures to increase female participation in peacekeeping operations. Bangladesh is now sending one platoon female members with each military contingent.

Peacekeeping is a dynamic enterprise which has evolved over time both in policy and operational domains. Since 2015, there have been important changes in peacekeeping through structural reforms in the peace and security pillar of the UN. There have been evolutions of important concepts and commitments such as Action for Peacekeeping, Sustaining Peace, growing synergies among various phases of peace keeping—starting from mandate setting down to peacebuilding and exit strategy etc. Essentially, the actors in the policy arena and the field have been bound to adapt to many resultant drivers of change to cope up with the shifting priorities and challenges. In the process, as major troops and police contributing country, Bangladesh has essentially shown certain degrees of flexibility, adaptability and resilience. The  focused areas have been on pre-deployment training, building meaningful partnerships, and necessary adaptation with shifting challenges in the areas of primacy of politics, protection of civilians, partnerships, safety and security, performance, accountability, transitions, women peace and security etc. In terms of  preparations for deployment, for example,  in 2019, Bangladesh kept three contingents at readiness level in United Nations peacekeeping readiness system (UNPCRS) to meet the immediate United Nation need at any critical time. An Infantry contingent of 850 personnel in DR Congo- MONUSCO as Readily Deployable Battalion (RDB) has been deployed. For the first-time, Bangladesh started deploying  military observers in United Nations Peacekeeping: Nations Interim Security Force for Abyei (UNISFA), South Sudan.

Bangladesh is keen to expanding its partnership with the UN and other partners to strengthen UN Peacekeeping operations and contribute its part  to maintain global peace and security.  The country is proud of the service and sacrifices of the peacekeepers in the past and remains committed to respond to UN’s call for participating in future Peacekeeping missions.