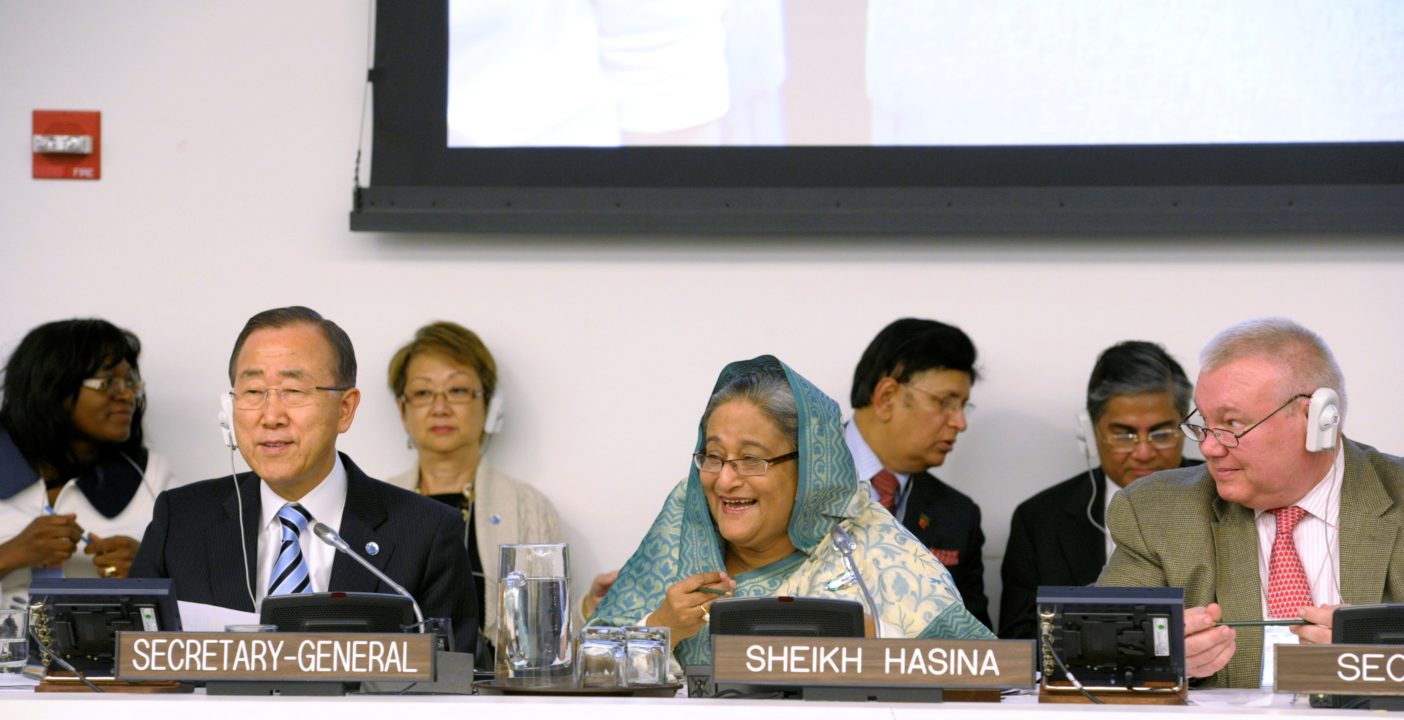 Prime Minister Sheikh Hasina at a  high-level meeting on peacebuilding, entitled, “Peacebuilding: Way towards Sustainable Peace and Security” at the UNHQs on 25 September 2012

Our Father of the Nation Bangabandhu Sheikh Mujibur Rahman in his UNGA speech in 1974 said,

“Peace is an imperative for the survival of humanity. It represents the deepest aspirations of men and women throughout the world”.

Forty-two years after that on 27 April 2016, members of the United Nations both at the General Assembly and the Security Council, echoed the same sentiment beginning a new paradigm in UN Peace discourse. On that day, in a rare parallel process, the UN General Assembly and UN Security Council adopted, by consensus, two most comprehensive UN peacebuilding resolutions (popularly known as ‘Twin Resolutions’) in its history. Most significantly, the ‘twin resolutions’ put the concept of ‘sustaining peace’ on a strong foundation. The idea is about shifting the focus of peacebuilding from recurrence of violence after major conflicts to enhanced efforts on conflict prevention through participatory and nationally owned processes.

Bangladesh remained actively engaged in the process leading up to the adoption of the resolutions and thereafter remained engaged in the ensuing ‘surge in peace diplomacy’ in the General Assembly, Security Council and Peacebuilding Commission. The most fitting recognition of such a sustained engagement came in the beginning of 2018 when the President of the 72nd UNGA invited Bangladesh Permanent Representative to co-facilitate the resolution on Secretary-General’s report (A/72/707–S/2018/43) on Peacebuilding and Sustaining Peace. Bangladesh successfully steered the process along with Lithuania.

Bangladesh’s profile as a leading contributor of troops and police to UN peacekeeping operations for many years put us to the forefront of the debate surrounding reforms in the peace and security architecture of the UN. We voiced support for the Secretary-General’s Action for Peacekeeping (A4P) agenda for UN peacekeeping operations. The Hon’ble Prime Minister’s kind participation at the Nelson Mandela Peace Summit and UN Secretary-General’s High-level Meeting on the Action for Peacekeeping (A4P) during the high-level segment of the UNGA in September 2018 reaffirmed Bangladesh’s unwavering commitment in this regard. We have been actively supporting the Secretariat in its implementation efforts of A4P and pledged to Champion on specific areas to carry forward the shared commitments of member states in a coordinated manner.

Given the renewed importance of the Peacebuilding Commission (PBC) in the new context, Bangladesh further intensified its engagements in the PBC. In the lead up to the 2020 Review of the Peacebuilding Architecture, we are playing a constructive role to bridge gaps among member states for defining its roadmap. We are also continuing to act as the coordinator of NAM caucus in PBC. In this role, we have been reporting monthly PBC activities at the NAM Coordinating Bureau (CoB) meetings and organizing meetings and briefing for NAM members on critical issues on peacebuilding and sustaining peace. In parallel, Bangladesh had also been playing an active role in the Group of Friends of the Peacebuilding Fund (PBF). Notably, Hon’ble Prime Minister contributed USD 100, 000 to the PBF during the high-level segment of the 72nd UNGA. Thereafter, we became member of the Group of Friends of the PBF led by the UK and Sweden.

Bangladesh’s contributions towards advancing the peacebuilding and sustaining peace agenda in the UN has earned her special recognition in the comity of nations. While we take pride in our achievements , we primarily drew inspiration from the dedicated efforts of thousands of our peacekeepers, and also from our heroes who made supreme sacrifices in faraway lands in their pursuit to ensuring global peace.