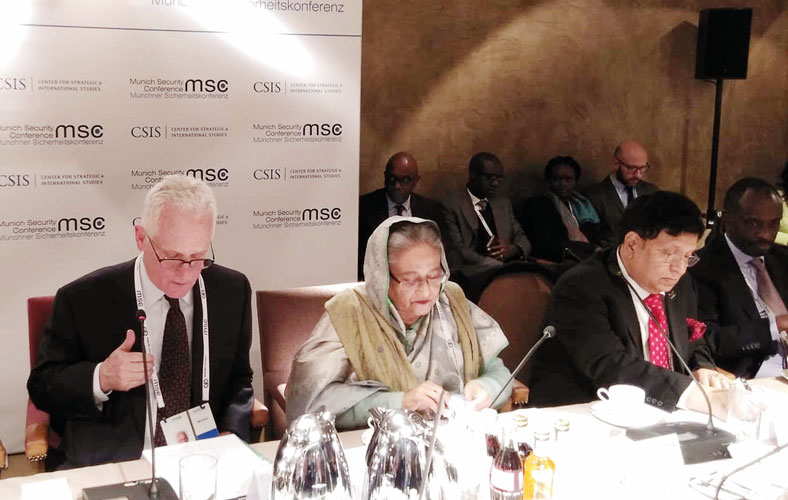 Hon’ble Prime Minister Sheikh Hasina  at a roundtable conference titled ‘Health in Crisis – WHO Cares’ in Munich, Germany on 15 February 2019

Global health is multidimensional in scope, often crosses physical boundaries and requires sustained high-level commitment and closer international cooperation, including partnerships among relevant stakeholders. Despite progress made, challenges in global health still remain, with special regard to inequities and vulnerabilities within and among countries, regions and populations. Safeguarding of the progress made in the health domain and advancing the agenda by paying due attention to the continuity and sustainability of current actions on global health are thus necessary. In this context, political commitments at the UN can play a significant role in contributing to the global health agenda. As Bangladesh endevours to address the health needs of the most vulnerable populations and improve equity, it needs to work for collective action and its greater coherence at all levels and across all sectors and stakeholders including partnering the international community. The Permanent Mission of Bangladesh in New York is working towards that end.

Bangladesh has seen remarkable health improvements since gaining independence in 1971, and has evolved to an exemplar of “good health at low cost”. Public Health scholars mentioned Bangladesh as a positive deviant, performing far better, given its widespread challenges, than anyone could have expected. The Lancet, renowned British medical journal, called this success, as one of the great mysteries of global health. In terms of health expenditure, per capita expenditure (PPP) from public funds in Bangladesh has increased to US$ 88 only in 2014 and it spent less than 3% of its GDP for health in the same year. However, Bangladesh’s health achievements in reducing maternal, infant, and under-5 mortality rates, increased vaccination coverage, higher life expectancy at birth have come in spite of this low per capita GDP spending on healthcare over the past nearly five decades. Bangladesh has outperformed its many South Asian neighbours, convincingly defying the expert view that economic strength and abundant health resources are the key drivers of better population health. Progress in infant, child and maternal mortality has been particularly striking, with maternal mortality reduced from 594 deaths per 100,000 live births in 1990 to 176 deaths in 2015. The infant mortality and under 5 mortality rates, as of 2016, are 29 and 36 per 1000 live births respectively.

Bangladesh succeeded in family planning and controlling and effectively eradicating many vaccine preventable communicable diseases. Controlling TB and Malaria is another success. Through mass deployment of community health workers, the number of people cured from TB rose from less than 50% to more than 90% – among the highest in the world. By recruiting female health workers to deliver door-to-door family planning services, Bangladesh has achieved high (62%) contraceptive prevalence and a dramatic fall in birth rates, from an average 6.3 births per woman in 1971 to 1.7 in 2015 – a rate unparalleled in other countries with similar levels of development.

Such achievements of Bangladesh are attributed to a variety of health and non-health systems related factors, including sustained political commitment of the government, maternal and child health-based strategies, expanded programme of immunization, our women empowerment strategy and support of women to national development, innovative low-cost technology, extensive networking of field workers, promoting and facilitating widespread education, establishment of community based clinics by the present government led by Hon’ble Prime Minister Sheikh Hasina, active collaboration between government and nongovernmental organizations, the proactive role of mass media, inter-sectoral cooperation, and use of information and communication technology, among others.

Bangladesh recognizes the right of all people to the highest attainable standard of physical and mental health. These fundamental human rights cannot be realized without Universal Health Coverage (UHC), which ensures that all people have access to the health services they need, without financial hardship. In this regard, it welcomes the “High-level meeting on universal health coverage” to be convened in New York by the President of the General Assembly during the high-level week of the 74th UNGA. Effective, results-oriented international coordination and cooperation is vital for the achievement of Sustainable Development Goal 3 and other health-related Goals. Thus, high-level political support from, and engagement with, Member States and non-State actors is fundamental. Taking all these into account, Bangladesh joins the global community in committing to achieve UHC by 2030 under the Sustainable Development Goals (SDG). Our efforts support the UN Secretary General’s Global Call to Action, and they are aligned with global workplan that WHO and UNICEF are coordinating on WASH in health care facilities.

Bangladesh is on track to meet the SDG targets for health, in particular to reduce maternal mortality and child mortality. We will achieve these targets by strengthening our health services, especially in the rural areas and especially related to safe delivery. Our planning is informed by sound statistics which are generated in partnership with the BBS so that we have reliable data to guide our investments and strategies. Bangladesh is an excellent example of how measuring hospital safety and using that information to target investments can save lives. Bangladesh also provides a model of how national statistical organizations can effectively support ministries of health so that it can do better the job of providing quality health care to all of the people in Bangladesh.