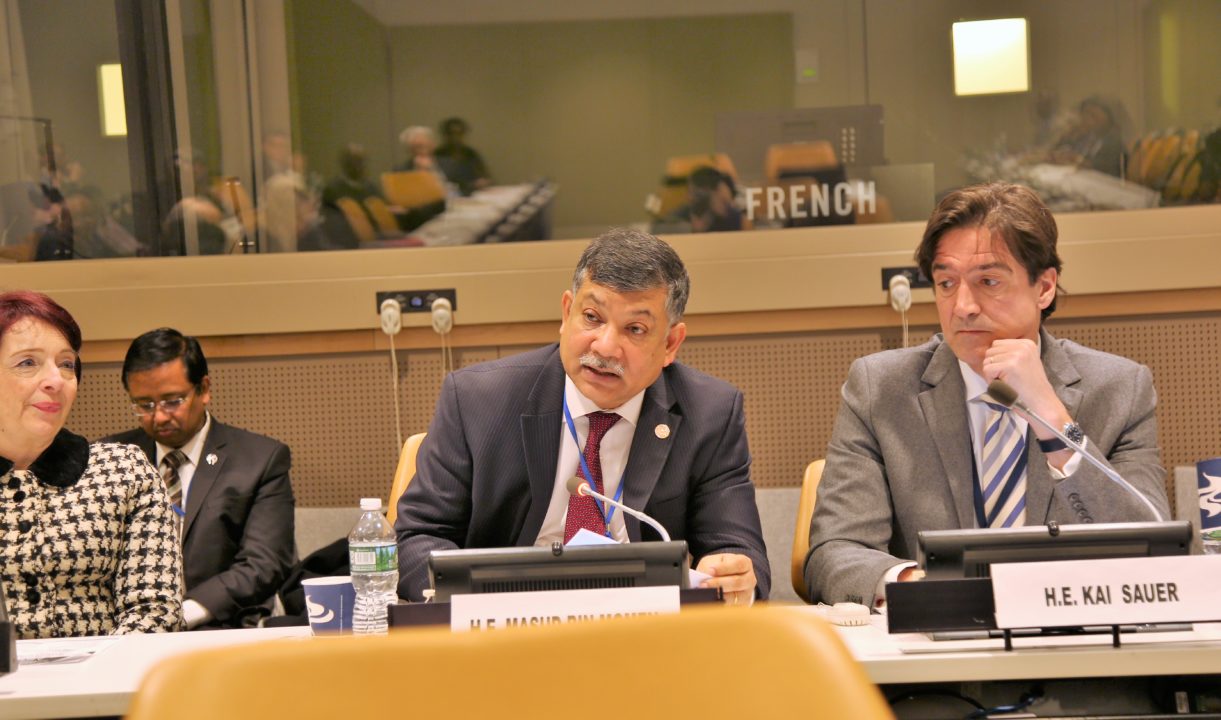 Today, at a side event, as part of the ongoing 57th Commission for Social Development (CSocD) was held at the UN Headquarters on “Social protection as a strategy for addressing inequalities and challenges to social inclusion” where the Permanent Representative (PR) of Bangladesh to the UN Ambassador Masud Bin Momen attended as a Keynote Speaker at High-Level Panel.

In his Keynote Speech, Ambassador Masud highlighted Bangladesh’s various initiatives on social protection which have been taken and implemented under Sheikh Hasina’s government. He said, “Our Government has formulated a comprehensive National Social Security Strategy (NSSS) to consolidate all safety net programmes. We are providing regular allowances to 6.5 million elderly men and women, widows, destitute women and persons with disabilities. This is a strategy adopted to alleviate poverty in the country”.

Referring the Cooperatives which played a big role in our country’s development journey, the Ambassador said, “Immediately after our independence, our the-then Prime Minister and the Father of the Nation Bangabandhu Sheikh Mujibur Rahman identified cooperatives as one of the tools to integrate people in the development of the country and rebuild its economy. He incorporated the cooperatives as the second sector of ownership in Article 13 of the country’s Constitution as he wanted to expand cooperative-based production and distribution management in all sectors including agriculture and land management, industrial initiatives and agricultural credit. A glaring example of a successful cooperative initiated at that time and still being run is Milk Vita- a national leading cooperative in Bangladesh”. “Following the development footprint of our Father of the Nation, Sheikh Hasina’s government had also initiated agricultural, fisheries, and weavers’ cooperatives as well as industrial cooperative societies for the poor people of their respective classes for their socio-economic development” the PR said.

Mentioning Bangladesh as the role model of women empowerment, Ambassador Masud said, “The Government has focused on skill development of the people particularly the women and has been creating job opportunities for them. Employment of women in our readymade garments’ factories improved their situation significantly at the grassroots level. The central bank of Bangladesh has been playing a pivotal role in offering banking facilities to millions, particularly poor women, who did not have access to any formal financial services. The ‘One House, One Farm’ project based on micro-savings for the rural and marginalized communities has benefitted women and lifted millions out of poverty in rural Bangladesh”. The PR emphasized on the need of resources, institutions, capacity, technology and most importantly political commitment to address the challenges of inequality and social exclusion.

PrevPrevious“Inspired by the foreign policy of our Father of the Nation, Bangladesh has been taking a value-driven approach to the UN peacekeeping operation” –Ambassador Masud Bin at the UN
NextThe 57th Commission for Social Development – Sheikh Hasina’s Government is working relentlessly to establish an inclusive, just and equitable society through addressing inequality -Ambassador Masud Bin Momen at the UNNext
© 2023 Permanent Mission of the People’s Republic of Bangladesh to the United NationsDiplomat Centre • 820 2nd Avenue, 4th Floor • New York, NY 10017 • USA • (212) 867-3434
Facebook-f Twitter Youtube