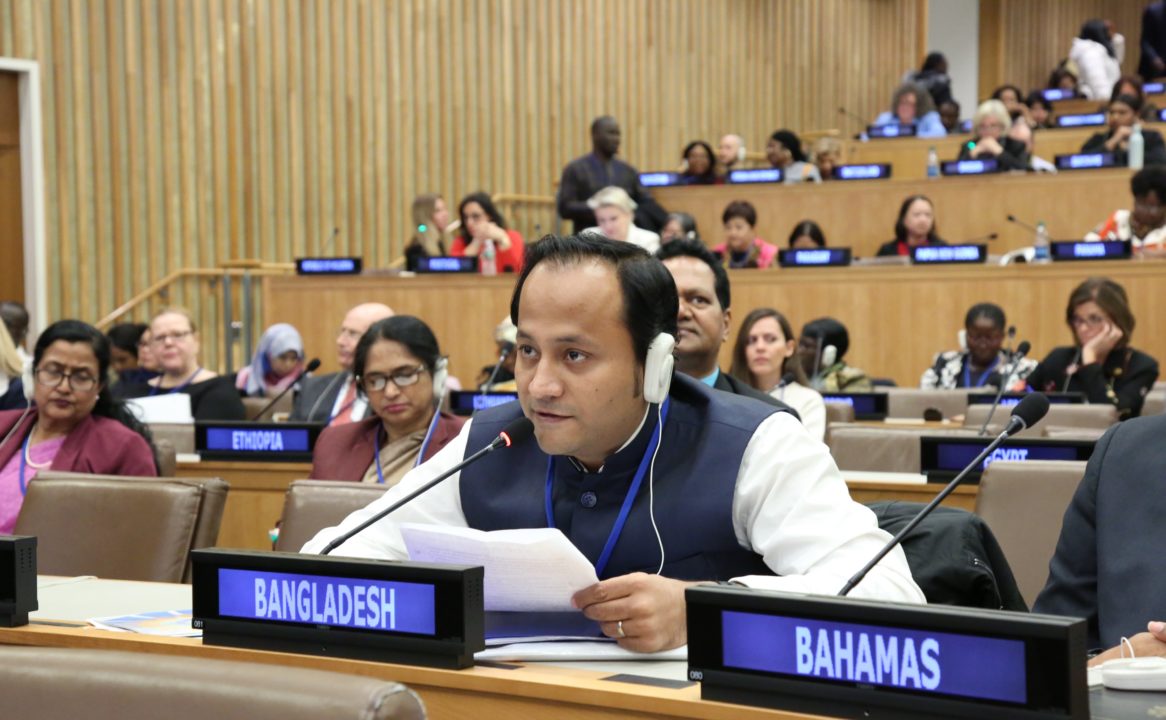 Today, Deputy Minister of Education Mohibul Hassan Chowdhoury MP highlighted Bangladesh’s unprecedented achievements in women’s equality and empowerment under the visionary leadership of Prime Minister Sheikh Hasina while speaking as a panelist at the high-level side event titled ‘Tracking the Walk: Measuring progress in Women’s Economic Empowerment’ co-organized by Bangladesh and International Trade Centre (ITC) as a part of the ongoing 63rd Commission on the Status of Women (CSW) at the UN headquarters. The side event was co-sponsored by Namibia, Rwanda, Kenya and UKAid.

In his remarks, the Deputy Minister said, “Our Father of the Nation Bangabandhu Sheikh Mujibur Rahman had sown the seed of gender parity in our nationhood. His able daughter, Sheikh Hasina, the present Prime Minister, also followed her father’s footsteps and put advancement of women at the heart of our development endeavours. She is one of the few world leaders who was present at the adoption of both the MDGs and the SDGs, a unique example of successful and sustained woman leadership”.

The Deputy Minister informed the audience that all of the national plans, development policies and programmes undertaken by Bangladesh are gender responsive where women’s equal contribution to the overall development of the country has been ensured. “We are also mindful of bringing the marginalized and vulnerable section of womenfolk under social safety net programmes so that no one is left behind” he added.

The Deputy Minister mentioned that 35% percent of women in Bangladesh hold a bank account, which is above the regional average for South Asia (Global Findex). He also mentioned about the SDG Tracker, an innovative tool that will help measuring the achievement in attaining SDGs.

A large number of delegations from member States, UN officials and Civil Society representatives attended the side event.

Prior to participating at this event, the Deputy Minister of Education attended a Ministerial Round Table on “Good practices and policies for the design and the provision and implementation of social protection, public services and sustainable infrastructure, including for the promotion of women’s representation in various sectors and all levels”. He highlighted Prime Minister Sheikh Hasina’s endeavours in women empowerment and country’s success in women leadership and participation in the parliament, government’s offices and UN peacekeeping Missions.

In the day-long engagements, the Deputy Minister also met a parliamentary delegation of Iran where the two delegations exchanged views and ideas about women empowerment in their respective countries.

Under the leadership of Deputy Minister of Education Mohibul Hassan Chowdhoury MP, Bangladesh Delegation earlier joined the inaugural session of the 63rd CSW. Permanent Representative of Bangladesh to the UN Ambassador Masud Bin Momen, Secretary of the Ministry of Women & Children’s Affairs of Bangladesh Ms Kamrun Nahar, Secretary of Coordination and Reforms of Cabinet Division Dr. Md Shamsul Arefin, Secretary in Charge of Ministry of Expatriate Welfare and Overseas Employement Ms Rownaq Jahan, Director General of Women Affairs Ms Badrun Nessa along are attending various events as members of the Bangladesh delegation at the 63rd CSW.

The Session of the CSW commenced on 11 March and will continue till 22 March 2019.