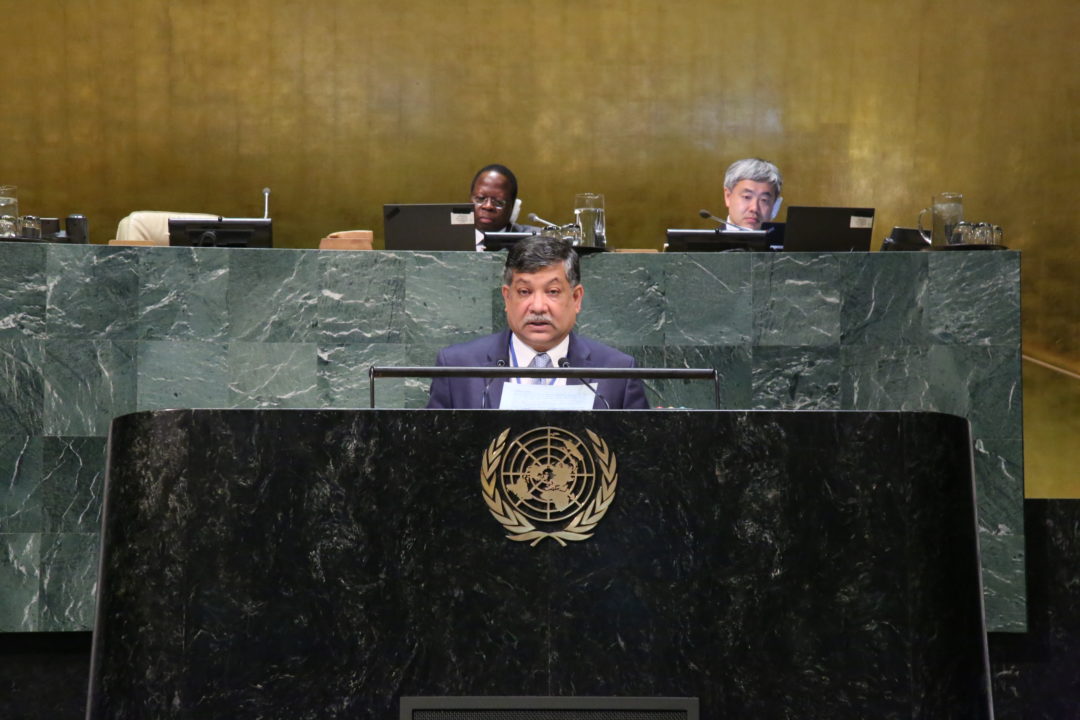 “The world needs multilateralism more than ever before and this can only happen if United Nations and the multilateral system as a whole embrace all stakeholders, business community, civil society and youth in particular; deliver on 2030 agenda and unfulfilled commitments; address the global challenges; and utilize the new opportunities. All these have to bring tangible and positive changes in common people’s lives” –said the Permanent Representative (PR) of Bangladesh to the UN Ambassador Masud Bin Momen at the High-Level Plenary Meeting of the International Day of Multilateralism and Diplomacy for Peace at the UNHQs, today.

The President of the UNGA convened this high-level plenary meeting to commemorate the first official International Day of Multilateralism and Diplomacy for Peace and promote multilateralism.

In this context, Ambassador Masud recalled the pronouncement of the Father of the Nation Bangabandhu Sheikh Mujibur Rahman made in 1974 at the UN and quoted – “The United Nations remains as the centre of hope for the future of the people in this world of sadness, misery and conflict”. The PR added that Prime Minister Sheikh Hasina too is a flag bearer of multilateralism who has been attending the high-level week of the UNGA for consecutive 10 years now and is perhaps among the very few world leaders to have participated in adoption of both the MDGs and SDGs.

Ambassador Masud highlighted Bangladesh’s engagements in multilateralism such as its contribution to mainstreaming the notion of Culture of Peace in UN discourses, participation in UN peacekeeping and peacebuilding and support to the notion of sustaining peace espoused by the Secretary-General and underscored that all these contributed to serve the maintenance of international peace and security.

The PR remarked that Bangladesh has been sheltering 1.2 million Rohingyas as a custodianship of UN while it is making bilateral efforts to resolve this issue permanently. He also mentioned that development is a priority of the government and Bangladesh is committed to accelerate its actions for implementing all global development agendas for sustainable development and contributing climate change. He also referred to the qualification of Graduation by Bangladesh in which the UN system had played a vital role. “All these reflect our abiding commitment to and trust in multilateralism” he added.

Ambassador Masud attracted the international community’s attention to the challenges of climate change, forced displacement, conflict, ultra-nationalism, terrorism, extremism, inequality, cyber-attacks, health issues that transcend borders and observed, “It would be a folly if we think the developing world only needs multilateralism & the fortunate others do not”.

Referring to the Fourth Industrial Revolution (4IR) the PR also said, “It’s not only the challenges that the 4IR brings forth but there are enormous opportunities as well. We need to put these opportunities to the benefit for humankind and keep the dark sides at bay”.

The International Day of Multilateralism and Diplomacy for Peace was officially adopted through a resolution (A/RES/73/127) by the UN General Assembly on 12 December 2018. As emphasized in the resolution, the International Day is a reaffirmation of the UN Charter and its principles of resolving disputes among countries through peaceful means. It acknowledges the use of multilateral decision-making and diplomacy in achieving peaceful resolutions to conflicts among nations.