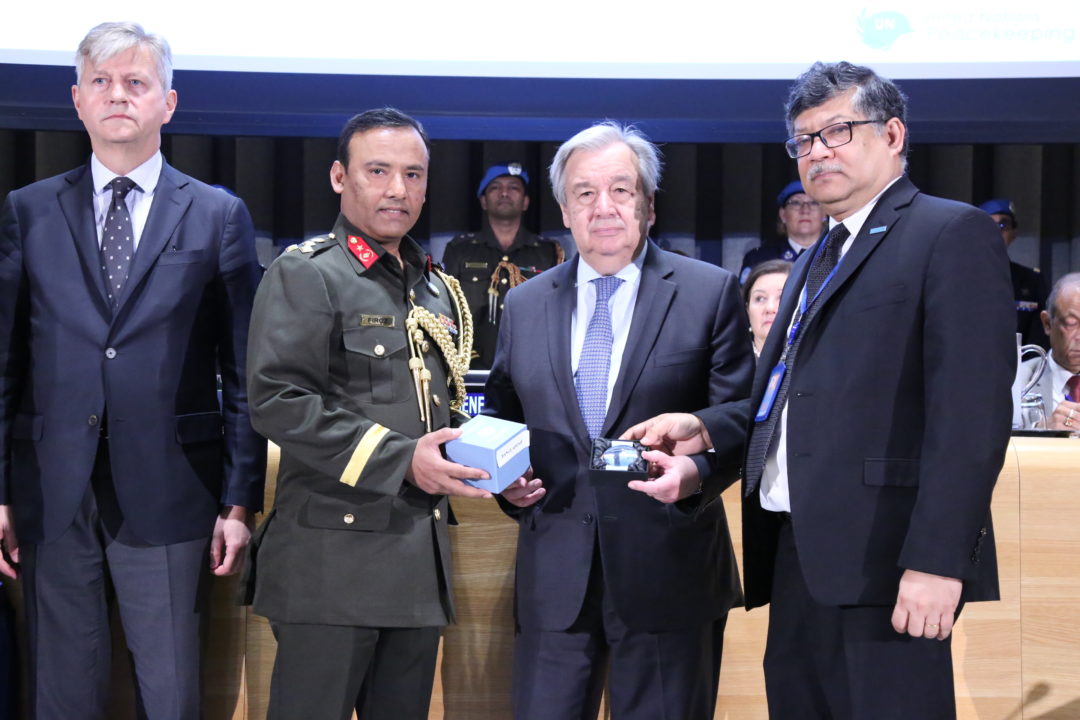 Today, the UN awarded ‘Dag Hammarskjöld Medal’ to 119 fallen peacekeepers from 27 member states to honour their supreme sacrifice. Among those fallen heroes, 12 are from Bangladesh who lost their lives on duty in 2018 in various parts of the world to ensure global peace under the aegis of the UN Peace Operations. The medals were awarded by the UN Secretary-General António Guterres and received by the respective Permanent Representatives of the 27 countries at the event to observe the ‘International Day of the UN Peacekeepers’. Permanent Representatives, senior diplomats, officials of the Arms Forces & Police from several member states and high level UN officials participated the solemn ceremony.

Permanent Representative (PR) of Bangladesh to the UN Ambassador Masud Bin Momen received the medals on behalf of Bangladesh. Defense Advisor of this Mission Brigadier-General Khan Firoz Ahmed, relevant other officers from the Mission and officers from Bangladesh Army, Navy and Police working at the UN Headquarters were also present.

The Permanent Mission will make special arrangements to send the medals to the family members of the 12 fallen peacekeepers of Bangladesh.

At the opening of today’s observance of the ‘International Day of the UN Peacekeepers’, the UN Secretary-General António Guterres laid floral wreath in honour of all fallen peacekeepers at the Peacekeepers Memorial Site in the North Lawn of the UNHQs.

In his remarks at the Dag Hammarskjöld Medal ceremony, the UN Secretary-General said, “Today, we honour 119 brave men and women who lost their lives while serving the United Nations. Hailing from different backgrounds, our fallen heroes were united in their efforts to help the UN attain its most important objective – to save future generations from the scourge of war. The medal we posthumously honour them with bears the name of Secretary-General Hammarskjold. It is inscribed with his name as well their own – forever linking them in our hearts and in our memories”. The Secretary-General offered his highest tribute to the fallen peacekeeper and put his sincere condolence to their loved ones left behind.

The congregation paid respect to the departed souls by observing one minute silence.

The global theme for this year’s commemoration is ‘Protecting Civilians, Protecting Peace’. Bangladesh is the second largest contributor of uniformed personnel to UN Peacekeeping.  It currently deploys more than 6,600 military and police personnel in nine peacekeeping missions in Abyei, the Central African Republic, the Democratic Republic of Congo, Haiti, Lebanon, Mali, Sudan, South Sudan and Western Sahara. So far, 146 peacekeepers from Bangladesh have lost their lives on duty while serving UN Peace Operations in various parts of the world.