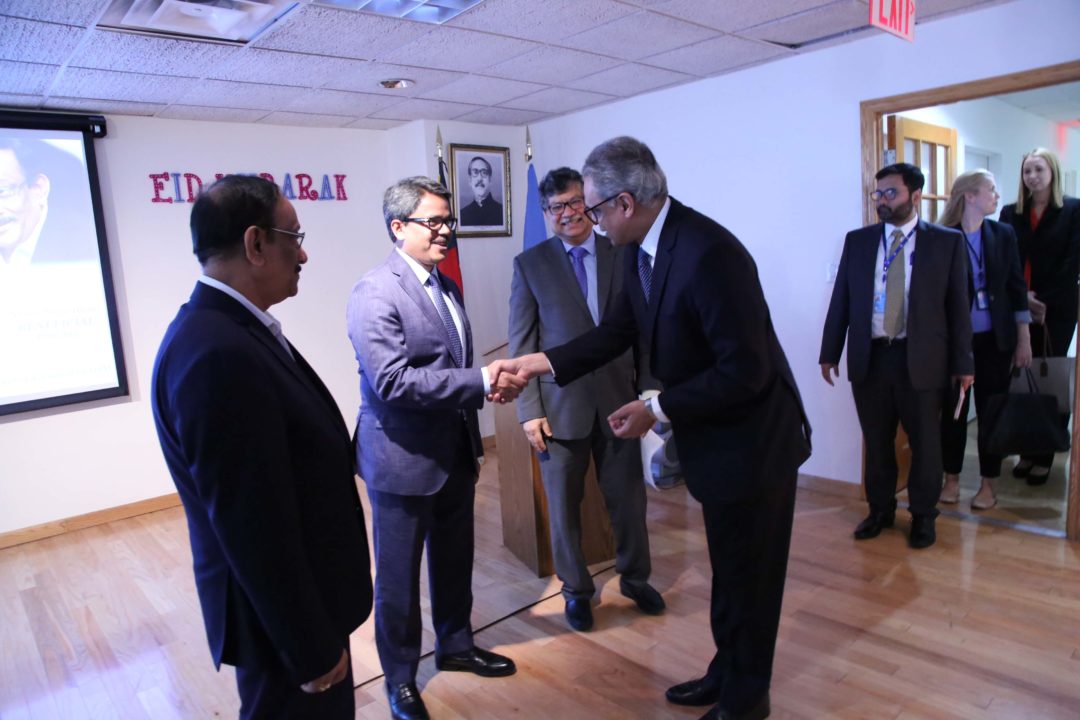 A Eid Reunion was organized today at the Bangabandhu Auditorium of Permanent Mission of Bangladesh to the United Nations in honour of Permanent Representatives and Ambassadors of the member states of the UN. Bangladesh’s State Minister for Foreign Affairs Md. Shahriar Alam MP and Foreign Secretary Md. Shahidul Haque were present in the event.

The re-union turned into a friendly gathering of Permanent Representatives and diplomats of more than 100 countries including India, Japan, Russia, China, Sri Lanka, Saudi Arabia and Qatar. In this grand event, the main point of discussion was the upcoming election for the position of Deputy Director-General (DDG) of the International Organization for Migration (IOM) where Bangladesh has floated the candidacy of its Foreign Secretary Ambassador Shahidul Haque.

In his opening remarks, Permanent Representative (PR) of Bangladesh to the United Nations Ambassador Masud Bin Momen requested fellow PRs to support Bangladesh’s candidate for the post of DDG of IOM. He also focused on various aspects of the remarkable development trajectory of Bangladesh. He urged member states to play an effective role for a permanent solution to the Rohingya crisis.

Bangladesh’s Foreign Secretary Md. Shahidul Haque made a presentation on the latest global situation on migration (Migration Order 3.0) where he highlighted the need for an effective migration governance for safe, orderly and regular migration. He also highlighted the various difficulties with regard to human mobility. Bangladesh Foreign Secretary said that he intends to utilize his long experience of working with IOM and dealing with migration issues for the welfare of the world.

In his statement, State Minister for Foreign Affairs Md. Shahriar Alam MP said that Bangladesh has emerged as a responsible state under the dynamic and pragmatic leadership of Prime Minister Sheikh Hasina. Referring to Bangladesh’s long and deep involvement with international migration discourse, he said, “To continue the legacy, now at the operational level, Bangladesh has floated candidacy of its Foreign Secretary Ambassador Shahidul Haque for the position of DDG of IOM”. He urged the representatives of member states to support Ambassador Haque. The State Minister said, “Bangladesh Foreign Secretary Mr. Haque is the Special Envoy on Migration for Prime Minister Sheikh Hasina and a professional diplomat who has worked for 12 years in IOM. If he gets the opportunity to work as a DDG IOM, then this experience can be used to make IOM a more effective organization for better management of global migration”.

Showcasing the tremendous socio-economic development of Bangladesh, the State Minister also thanked the diplomats present for their support to Bangladesh’s candidacy for ECOSOC election to which would be held on 14 June 2019.

It may be noted that PRs of Bangladesh and Spain were appointed as co-facilitators for the modalities resolution of International Migration Review Forum in December 2018. Today, Ambassador Masud Bin Momen and the PR of Spain co-facilitated the first round of formal negotiations on the zero draft of that resolution at the UNHQs.

The guests were entertained with traditional Bangladeshi food. As Eid gifts, Bangladeshi tea and various handicrafts items were also distributed among them.

Civilian and Defense officials of Bangladesh working at the UN Headquarters were also present at the event.

The State Minister for Foreign Affairs and Foreign Secretary are in New York for a one-day official visit.