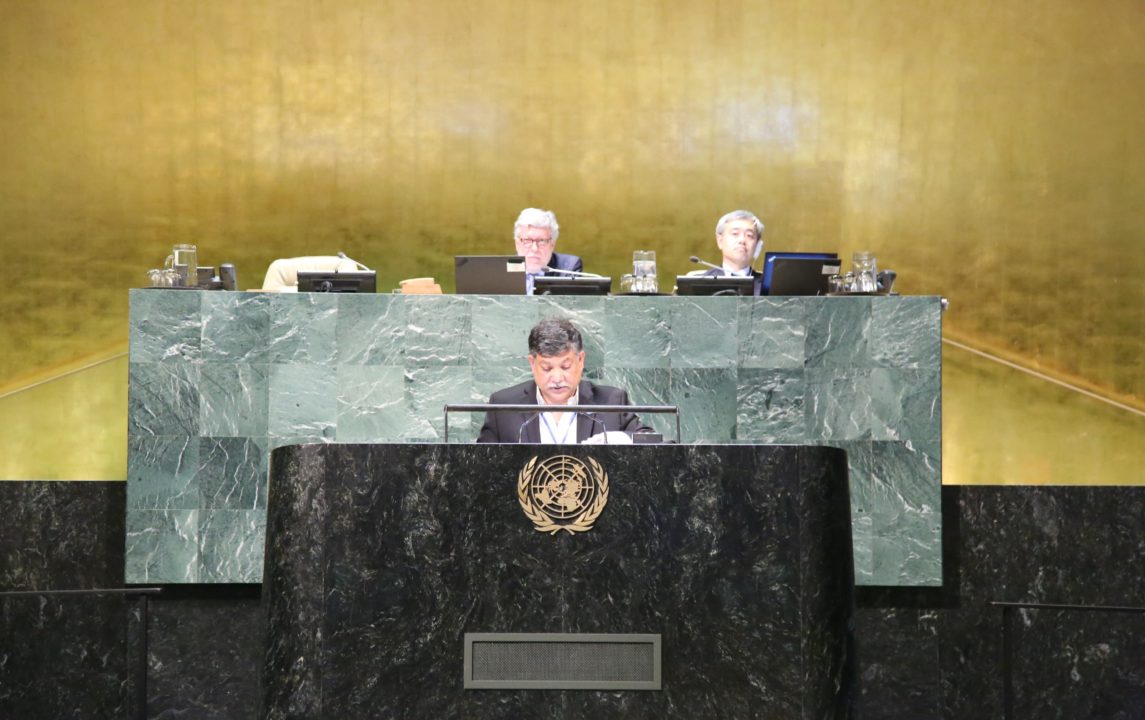 The Permanent Representative (PR) of Bangladesh Ambassador Masud Bin Momen highlighted the UN’s systematic failure to prevent atrocities in Rakhaine state of Myanmar referring to the recent report on ‘Independent inquiry into the involvement of the UN in Myanmar from 2010 to 2018’ of Gert Rosenthal, the former Guatemalan Foreign Affairs Minister. In this regard, the PR said, “There is no denying what has happened to the Rohingyas. Although with the available resources and technology, lack of early warning is rarely a problem, UN mechanisms in Myanmar could not provide early warning. The problem was even bigger- not unsurprisingly though- it was not lack of warning but of timely response. Very recently, from Rosenthal report, we have come to know in detail why and where UN failed”. Ambassador Masud was speaking at the Plenary debate titled, “The responsibility to protect (R2P) and the prevention of genocide, war crimes, ethnic cleansing and crimes against humanity: report of the Secretary-General”.

Quoting from Rosenthal’s report, the PR said, “It must also be said that the United Nations’ collective membership, represented by the Security Council, bears part of that responsibility, by not providing enough support to the Secretariat when such backing was and continues to be essential.  If there is one single action that might have altered the course of events in Myanmar it would have been the timely and impartial presence in Rakhine State of some type of United Nations observatory that would offer a measure of confidence to the oppressed minorities that their basic human rights would be respected, and that the root causes that led to their forced emigration would be addressed by the national authorities”.

Mentioning the generosity of the Government and People of Bangladesh, the PR said, “The international community haplessly observed the Rohingyas fleeing persecution and atrocity crimes. It is the bold leadership of Prime Minister Sheikh Hasina, popularly known as Mother of Humanity for her generosity that these persecuted people were given shelter in Bangladesh when these people had no place to go to”.

He urged the international community, in particular the UN Security Council, to consider and come forward to support the pillars II & III of the R2P which clearly stated about the accountability of such barbaric acts and responsibility of the UN to protect against these kinds of acts. The PR said, we must not fail the Rohingya population. The solution to this problem lies first and foremost with the Myanmar authorities, and they will have to resolve it by creating the conditions conducive for the Rohingya population to return home in safety.

“The Responsibility to Protect and the prevention of genocide, war crimes, ethnic cleansing and crimes against humanity” is one the formal agenda of UNGA’s 73rd session. Ms. María Fernanda Espinosa Garcés, the President of the 73rd UNGA and Ms. Maria Luiza Ribeiro Viotti, Chef de Cabinet on behalf of the Secretary-General spoke at the inauguration of the occasion. More than 70 member state spoke at the debate.