IMLD observed at the UNHQs – The Global Community urges to use the power of Language for addressing the rise of conflict, intolerance and social tensions 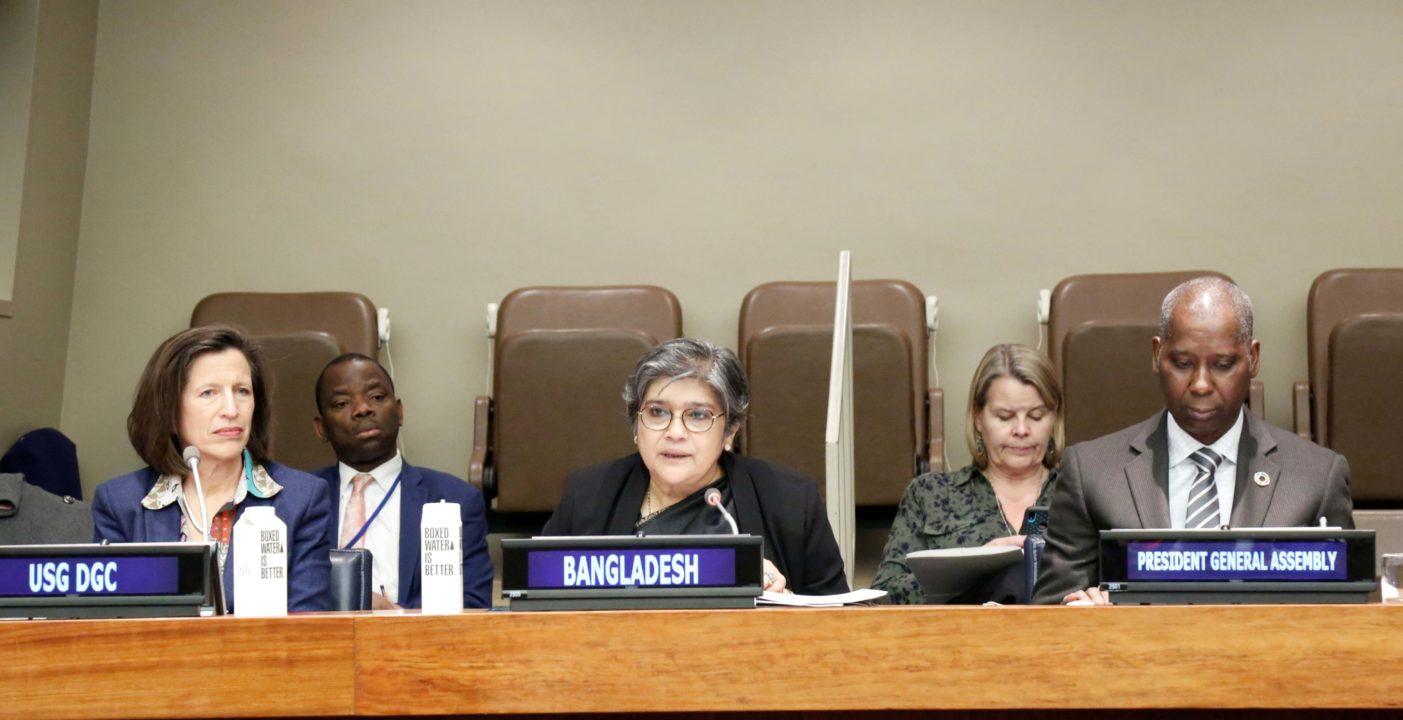 Today, the International Mother Language Day (IMLD) was celebrated for the 4th consecutive year at the UN Headquarters in an international ambience where the global community urged to use the power of language for addressing the rise of conflict, intolerance and social tensions. The Permanent Mission of Bangladesh to the United Nations, in collaboration with the Permanent Missions of Australia, Cameroon, Mexico and Trinidad and Tobago, as well as the UN Department of Global Communications, UN Coordinator for Multilingualism and UNESCO’s New York Office, organized the event.

The venue was full to its capacity with the presence of senior diplomats of a large number of member states, UN officials, media personalities and civil society representatives. The President of the General Assembly attended the event as a special guest. The Permanent Representative (PR) of Bangladesh to the UN Ambassador Rabab Fatima made the welcome remarks. The President of the UN General Assembly Mr. Tijjani Muhammad-Bande, PR of Trinidad and Tobago Ms Pennelope Althea Beckless, Chargé d’affaires of Australia Ms Tegan Brink, Chargé d’affaires of Cameroon Zacharie Serge Raoul Nyanid, Chargé d’affaires of Mexico Juan Sandoval Mendiolea, UN Under-Secretary-General for Global Communications Ms. Melissa Fleming (on behalf of the UN Secretary-General), Director of the Documentation Division of  UN Department of General Assembly and Conference Management Ms. Cecilia Elizalde also spoke. In addition, Director and UNESCO Representative to the UN in New York Ms. Marie Paule Roudil read out the message of DG of UNESCO. The New York City Mayor Bill de Blasio gave a special message on the occasion which was also read out.

In her welcome remarks, Ambassador Rabab Fatima said, “Bangladesh is the only nation in the world to have shed blood for its mother tongue. The proclamation by UNESCO in 1999, to observe 21st of February as the International Mother Language Day is the most befitting tribute to the language martyrs who made their supreme sacrifice on this very day in 1952 to protect their mother tongue ‘Bangla’. And this historic initiative was spearheaded under the leadership of Prime Minister Sheikh Hasina”. The PR also paid rich tribute to the Father of the Nation Bangabandhu Sheikh Mujibur Rahman for leading the language movement of 1952, culminating in our independence in 1971.

Citing the theme of this year’s celebration ‘Languages without Borders’, Ambassador Fatima stated that the power of language transcends borders, and serves as a powerful tool to connect different peoples and cultures. She urged all stakeholders to protect languages and cultures, including those facing extinction.

The President of the UN General Assembly Tijjani Mohammed-Bande in his address said, “The UN has clearly provided the lead by underscoring in 2018 that linguistic diversity and multilingualism are a must for sustainable development at this time when many languages are dying at an alarming rate. The global community must redouble its efforts to promote mother languages”.

The other discussants upheld the inalienable right of people across the globe to their mother languages and stressed on the importance of linguistic and cultural diversities. They expressed support for using mother languages to promote understanding, tolerance, dialogue and social inclusion as the catalysts for sustainable development and realizing the 2030 Agenda.

The multilingual cultural segment that followed began with the theme song -‘Amar bhaiyer rokte ragano ekhushey February’ sung in chorus by Shri Chinmoy Group and a Bangladeshi youth choir. Subsequently, the UN Chamber Music Society enthralled the audience by rendition of songs and musical tunes in Bangla from the poem ‘Stream of Life’ by Rabindranath Tagore, Navajo, Creole, Sanskrit and Swahili in orchestra setting.

At the beginning of the programme, one minute’s silence was observed to pay homage to the language martyrs. A documentary on IMLD was also screened.

Members of Bangladeshi daispora living in New York including Fredom Fighters, US Awami League and US Awami Family members, Bangladeshi’s working at UN, social and cultural activists also participated at the event.