A Story of Triumphs and Tribulations: Implementing Services for Autism in Bangladesh. By Saima W. Hossain* 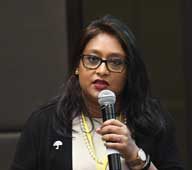 A few days ago, a friend said to me that my focus on autism, although rather successful, had “sucked out all energy from other critical areas of social need in Bangladesh.” My friend wanted to know if I would be interested in expanding my visibility and successful approach to autism, to other issues that have apparently been left by the wayside due to everyone’s eagerness to work on an issue popular with the Prime Minister’s daughter! I know my friend’s statement was meant to be provocative, but it also made me reflect on what it was that I had set out to do when I began working in this area in Bangladesh. Has enough been achieved for me to ‘pass on the baton’ to the many others who have now dedicated themselves to this issue, thereby beginning to shift my focus towards addressing other social needs both in Bangladesh and elsewhere?

Bangladesh in many ways has been in the forefront of the autism conversation not because we have the most cutting edge innovative and effective services, but because we have achieved one of the most difficult issues in the area of autism: that of garnering the interest of those not personally directly affected by it.

When looking at what Bangladesh has achieved in the area of autism from the point of view of an expert and researcher, one must admit that Bangladesh has a long way to go. We still do not have sufficiently trained experts, evidence-based interventions and early diagnosis and support for families. Despite having a national committee represented by 16 ministries and a thorough multisectoral national strategic plan to guide them, backed by adequate laws, protections, and effective policies, programs are not visible on the ground to evidence that things are changing for the better for families. There is still much to be done.

Despite the fact that better services have not mushroomed in the country, overall disability services and inclusion has significantly improved. Participation in standardized and matriculation exams for many visually and hearing impaired students are routinely practiced; all new schools are required to be wheel-chair accessible; and primary school teachers train on disabilities and routinely register students in the school, although drop-out rates are not as yet accounted for. Disaster planning and management in Bangladesh has a comprehensive procedure on how to communicate and assist those with disabilities, including autism; all shelters are built to be accessible; staff are trained on what an individual on the spectrum may need; and mental health support during crisis situations have also been established as a standard practice. Government and private organizations have taken the initiative to help set up cafes, bookshops, souvenir shops, and art galleries to display and sell products made by persons on the spectrum, or those with disabilities. There are some which also employ such persons. Such social change reflecting awareness and acceptance was inconceivable even 5 years back.

The challenges faced while attempting to bring long-term change particularly in a developing country is clearly evidenced by the situation of autism in Bangladesh. On one hand, we have tremendous social awareness, and an almost zealous need by political and social movers and shakers to do something demonstrable for autism. On the other hand, the severe lack of evidence-based quality therapeutic and other support services predominates those whose lives depend on them. Political will, finance and resources aside, that any large-scale initiative in Bangladesh being a country of more than 160 million, in a small mass of land mostly covered with waterways and prone to frequent natural and manmade disasters, is testing. The issue of autism, similarly, has been a complex challenge that required a multifaceted approach, creative thinking, and the will of those who are absolutely dedicated to it.

Through the unilateral view of autism, we may not have achieved all the milestones most countries use to measure achievement in addressing autism. However, when looked through the prism of social change, the parameters of the theory of change have successfully been achieved by Bangladesh. If social awareness was the only goal, we have achieved that in spades, however, a true understanding of what individuals and their families need, is still a goal that we are working to achieve. The country’s commitment to this gives me hope that it will be achieved at some point.