United Nations issues stamps on the occasion of UN Peacekeepers Day, marking the Birth Centenary of the Father of the Nation of Bangladesh 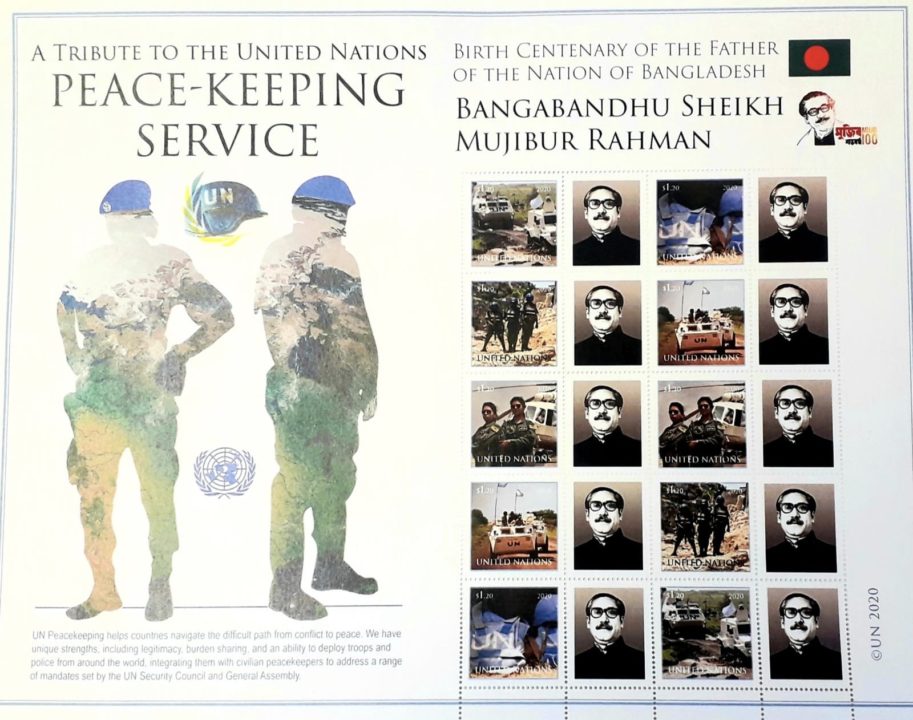 Today, on the occasion of the ‘2020 International Day of the United Nations Peacekeepers (Peacekeepers Day)’ the UN Postal Administration, jointly with the Permanent Mission of Bangladesh to the UN in New York, issued a set of commemorative stamps as a tribute to UN peacekeepers and marking the Birth Centenary of the Father of the Nation of Bangladesh, Bangabandhu Sheikh Mujibur Rahman. The commemorative stamp folio features Bangladesh’s flag, logo of MUJIB 100, portrait of Bangabandhu and images of UN Peacekeeping services around the world. The images include the iconic posture of two Bangladesh female helicopter pilots, first ever deployed in the UN history.

Responding to the occasion, the Permanent Representative of Bangladesh to the UN Ambassador Rabab Fatima said, “This is a humble, yet fitting tribute to Bangabandhu’s visionary leadership and doctrine of peace which defines our foreign policy; to our commitment to UN peacekeeping; as also to our valiant and selfless peacekeepers.”

Release of the commemorative stamps is a part of the year-long activities of the Permanent Mission of Bangladesh to observe the Birth Centenary of the Father of the Nation. This is also a recognition of Bangladesh’s glorious peacekeeping record and contribution to UN Peacekeeping operations, which has its genesis in the pronouncement of the Father of the Nation at the UN General Assembly in 1974, “Peace is imperative for the survival of humanity’ and in his overarching principle of ‘Friendship to all, malice towards none”.

To observe the Day at the UNHQs in New York, UN Secretary-General António Guterres laid a wreath in honour of all fallen peacekeepers and paid tribute to those who carry their service in the cause of peace. The Secretary-General subsequently held a virtual ceremony to award Dag Hammarskjöld Medals posthumously to 83 peacekeepers who lost their lives in 2019. Two Bangladesh peacekeepers, Constable Mohammad Omar Farouk and Sainik Atiqul Islam, who made supreme sacrifice in line of duty in 2019, were also given this posthumous award. The PR of Bangladesh joined the PRs of other member states in the commemorative ceremony which carried a message from her given on the Day.