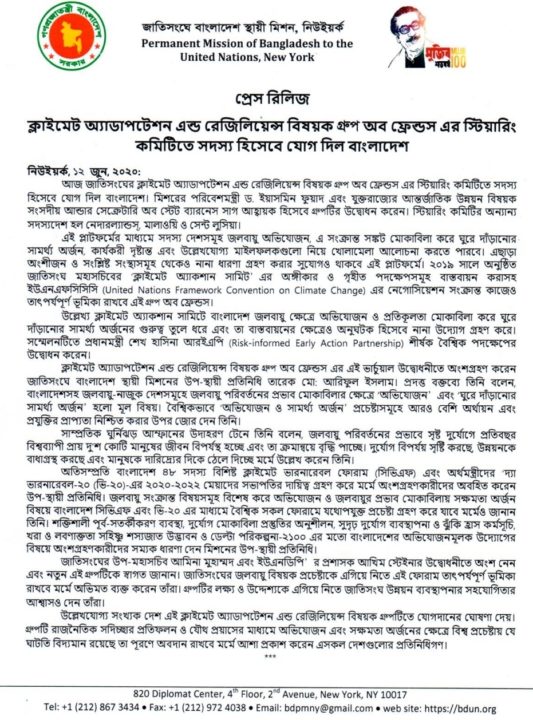 Bangladesh joined as a member of the Steering Committee of the UN Group of Friends on climate adaptation and resilience today.Dr. Yasmine Fouad, Minister of Environment of Egypt, and Baroness Saag, Parliamentary Under-Secretary of State for International Development of the UK launched the Group as its convenors. The other members of the Steering Committee are the Netherlands, Malawi and Saint Lucia.

This Group of Friends will serve as a platform where members can informally discuss adaptation and resilience efforts, share best practices, highlight major milestones, and be briefed on the issue by relevant entities and stakeholders.  It will be a link to wider UNFCCC processes, as well as support UN efforts to ensure meaningful follow up to the Secretary-General’s Climate Action Summit held on 23 September 2019.

It may be recalled that Bangladesh along with other members of the Coalition in the Climate Action Summit made great efforts to highlight the importance of adaptation and resilience-building as vital climate actions, and could catalyse many initiatives to fulfil that objective. Prime Minister of Bangladesh Sheikh Hasina launched the ambitious Risk-informed Early Action Partnership (REAP) initiative created by several countries and organisations in the Summit.

Deputy Permanent Representative of Bangladesh to the UN, Tareq Md. Ariful Islam, participated at the virtual launch of the UN Group of Friends of Climate Adaptation and Resilience in New York. In his statement, he said, “Adaptation and resilience building are key to tackle the impacts of climate change in Bangladesh and many other climate vulnerable developing countries. More finance must be directed to, and availability of technology must be ensured for, global adaptation and resilience building efforts”.

Mentioning that phenomenon of climate change has been devastating the lives of almost two billion people globally every year with disasters that have increased in frequency and intensity and referring to the super cyclone Amphan that ravaged the coastal areas of Bangladesh recently, the DPR of Bangladesh stated that disasters have been creating havoc in the lives of peoples, jeopardizing development and forcing more people into poverty.

Informing the participants about Bangladesh’s assumption of the Presidency of the 48-member Climate Vulnerable Forum (CVF) and the Vulnerable Twenty (V20) Group of Ministers of Finance for the term 2020-2022, the DPR stated that Bangladesh would make efforts for achieving fair and ambitious outcomes on all issues particularly on adaptation and resilience building in all global forums while leading these Groups. He also shared with the Group a few of Bangladesh’s transformative adaptation initiatives such as strong early warning system and disaster preparedness practices, robust disaster management and disaster risk reduction programmes, invention of drought and salinity resistant crops, along with the 82 -year Bangladesh Delta Plan 2100 based on natural solutions.

The Deputy Secretary General of the UN Amina Muhammad and the UNDP Administrator Achim Steiner participated in the meeting and welcomed the launching of the new Group mentioning that this Group would help taking forward the seven adaptation and resilience initiatives launched at the Summit and the Call for Action to reinforce adaptation and resilience building. They assured the Group to have the support of the UN Development System to fulfill its objectives.

A considerable number of cross regional countries announced their joining the Group of Friends on Climate Adaptation and Resilience. They hoped that this Group of Friends would work to mobilize political will and collective actions to address the existing gaps in the global endeavours for adaptation and resilience building.