The Quiet Survivors of a Global Pandemic 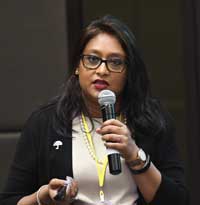 DHAKA, Bangladesh, Jul 8 2020 (IPS) – The issue of women’s rights, feminism and gender is complex and ongoing in most countries including Bangladesh. When I was asked to write about impact of COVID-19 on women and girls, I found myself drawn towards writing about women’s situation in general as that automatically impacts COVID-19 response as well. Since I am a woman who has been a part of many different cultures, yet a Bangali at heart, I am not only a survivor within its ranks but also responsible for being a part of the solution to the problems we face.

At the heart of it is the question: Are women in Bangladesh truly equal in all social, economic, cultural and legal practices in our country, as stated in our Constitution, as our Founding Father intended for us to be?

A decade and a half ago, findings from my graduate thesis (unpublished) exploring psychological well-being of women in Bangladesh showed that interestingly women reported valuing education above employment, and those who were employed did not exercise any control over their income. Also, they perceived the ‘purdah’ as a tool that enabled them to access greater social freedom, for which they were still required to garner permission.

In his chronicles as a young adult, Bangabandhu Sheikh Mujibur Rahman, the Founding Father of Bangladesh, wrote about the need for equal rights for men and women. He stayed true to his vision by giving them equal voice in the political process of the country as an equal citizen. As a President he went to tremendous lengths to rehabilitate and support the survivors of the genocide committed by the Pakistani military on Bengali civilians in 1971.

Since independence, much progress has been made to ensure that women from childhood have every opportunity to participate in educational and economic opportunities in the country. We not only have a woman as the Head of Government, but women holding positions in the justice system, as Speaker of the House of Parliament, as ministers, in academia, armed forces, and the corporate sector, among others. New laws addressing age of marriage, gender violence, domestic abuse and others have also been adopted.

Cornerstones of the transition of the role of women in Bangladesh are the growth in the RMG (ready-made garments) sector, and the opportunities created by small cottage industries. In the 1980’s, Bangladeshi society experienced a major shift due to the demand by the growing RMG sector for large number of cheap labor who would work under practically any circumstances.

Despite the many questionable labor practices and human rights issues, for the young women living in abject poverty and treated as a burden on their families, it was an opportunity for financial freedom, and to be valued within their families. Up until that time, the only other income opportunity for women with minimal education was domestic work. The same time that women began to be employed in the RMG sector, women were simultaneously also making incremental earnings through small cottage industries. Looking at these notable and impactful changes, it is undeniable that the most significant reason behind Bangladesh’s dramatic economic development is the role and function women have played, be it as a leader or as a daily wage earner.
Nevertheless, the question remains, has economic participation, opportunities for education, and employment truly impacted how women are treated in society on a daily basis?

Women have always struggled and continue to struggle to find balance between what is expected of them by their families and society, and what they wish to do for themselves. For many, the choice may appear easy to make and they happily do what is expected and needed, but for many it can lead to a lifetime of emotional turmoil. The choice women face between motherhood and a successful career cannot simply be addressed by changing laws without also addressing social expectations and attitudinal pressures to be the primary carer of children and dependents.

The societal imbalance that exists between men, women, and those we identify as third gender in Bangladesh, are in almost every country but manifests themselves differently. Thus, a one- size-fits-all solution does not work because of this very reason. The Covid 19 pandemic we are all trying to survive, demonstrates that no issue or solution is as simple as it appears.

Ensuring women are protected during this global crisis needs a solution which is based significantly on an understanding of the culture where the woman belongs; and importantly that the biased ocial and economic structure ensures they are impacted even more adversely. In order to effectively address the issue we need to be willing to take the ‘bull by the horn’ i.e. rather than reaching for the lowest hanging fruit, work at solutions that are mindful of its impact to all including women, and the diverse communities that make our country.

We need to acknowledge that we have not sufficiently delved into legal, social and economic protections that are necessary. Despite many female political leaders, the everyday woman still suffers in silence because she does not have the voice or the agency to speak her mind or pursue her dreams independently. Addressing these issues become even more important when we are faced with a global pandemic, making this gap starkly apparent. In the past few months, women across the globe have been victims of a rising number of domestic violence situations, which have escalated. In addition, women who hitherto worked in the informal sector, have been left particularly vulnerable; essentially unaccounted for and unsupported, significantly impacting their financial and emotional well-being.

PrevPreviousBangladesh jointly hands over to UN Secretary-General a Statement of Support to his Appeal for Global Ceasefire
NextBangladesh’s experiences in climate change and disaster preparedness helped it to tackle the COVID 19 emergency- Ambassador Rabab Fatima tells to the UNNext
© 2023 Permanent Mission of the People’s Republic of Bangladesh to the United NationsDiplomat Centre • 820 2nd Avenue, 4th Floor • New York, NY 10017 • USA • (212) 867-3434
Facebook-f Twitter Youtube