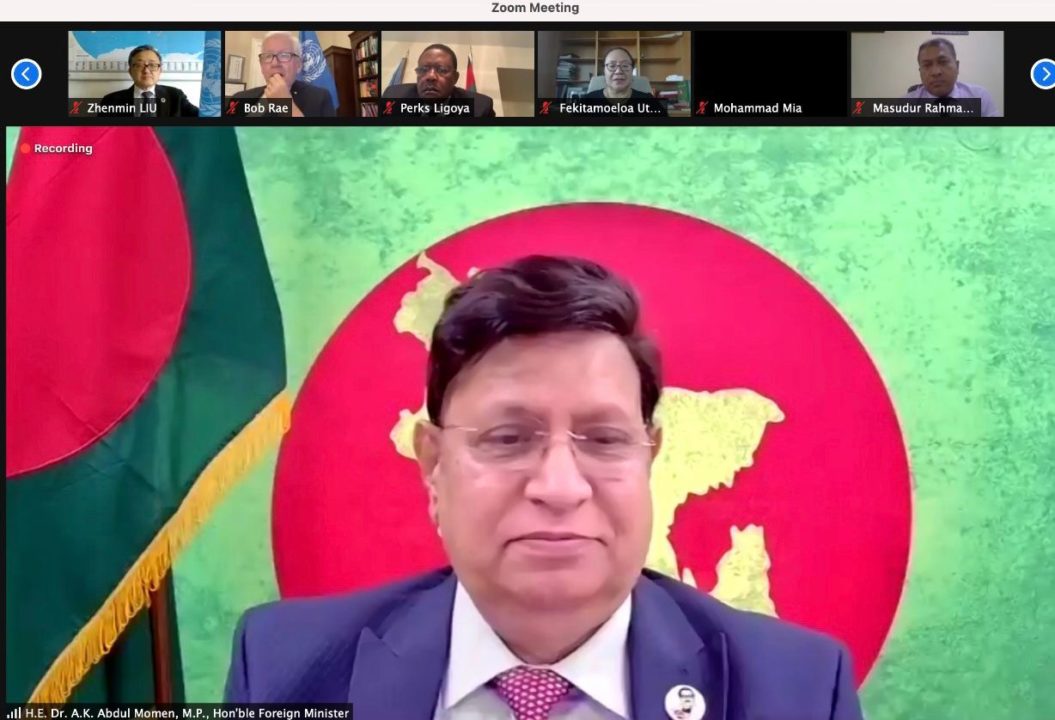 Today, Foreign Minister Dr. A.K. Abdul Momen called for an incentives-based and long-term graduation package for the graduating and graduated countries from LDCs as they are at a high risk of sliding back—both due to the COVID-19 impacts and the loss of LDC specific support measures. He was speaking as a keynote speaker at a high-level virtual event on ‘Building Resilience for Sustainable and Irreversible Graduation of the LDCs’ hosted by the Permanent Mission of Bangladesh in collaboration with the Permanent Mission of Canada and the United Nations Office of the High Representative for the Least Developed Countries, Landlocked Developing Countries and Small Island Developing States (OHRLLS).

Mr.  Eisenhower Mkaka, M.P, Minister of Foreign Affairs of Malwai and the Chair of the Global coordination bureau of the LDCs also delivered a keynote speech at the event. Among the other high-level speakers were Mr. Achim Steiner, UNDP Administrator, Mr. Liu Zhenmin, Under-Secretary-General, UNDESA, Ms. Fekitamoeloa Katoa ‘Utoikamanu, Under-Secretary-General and High Representative, OHRLLS, Mr.Taffere Tesfachew, Chair of the Committee for Development Subgroup on LDCs, Permanent Representatives of Qatar and Nepal, and Deputy Permanent Representative of Turkey.

Highlighting the multidimensional challenges faced by the graduating and graduated countries, Foreign Minister identified access to safe and affordable COVID-19 vaccines as the top priority for the LDCs now. He said that the most effective solution of this issue will be to utilize TRIP’s waiver to transfer technology and know-hows to LDCs that have production capacities for vaccines. He urged upon the development partners and vaccines manufacturers to extend support in this regard.

Foreign Minister Momen said that most of the LDCs have limited fiscal buffer and absence of ex-ante insurance schemes against shocks, which make their graduation trajectory highly challenging. He underlined the importance of adequate financing and resources as critical means for LDCs to keep pace with graduation expectation. In this regard, he emphasized that LDCs need enhanced financing support to mitigate critical deficits in physical and institutional infrastructure and capacity building.

Among other things, he also underscored the importance of promoting export diversification in LDCs with a firm commitment to DFQF market access, enhancing South-South and trilateral cooperation, incentivizing job creation, skills development, scaled up social protection of migrants, enhancing monitoring and support mechanism in the post-graduation phase etc.

Foreign Minister Momen is now on an official visit to New York to attend the Joint Thematic Event of the UNGA and ECOSOC on “Diversifying the Financing Toolbox to Enhance Investment in LDCs” to be held on 18th June 2021.  He is passing a busy time in New York attending different meetings and bilaterals.