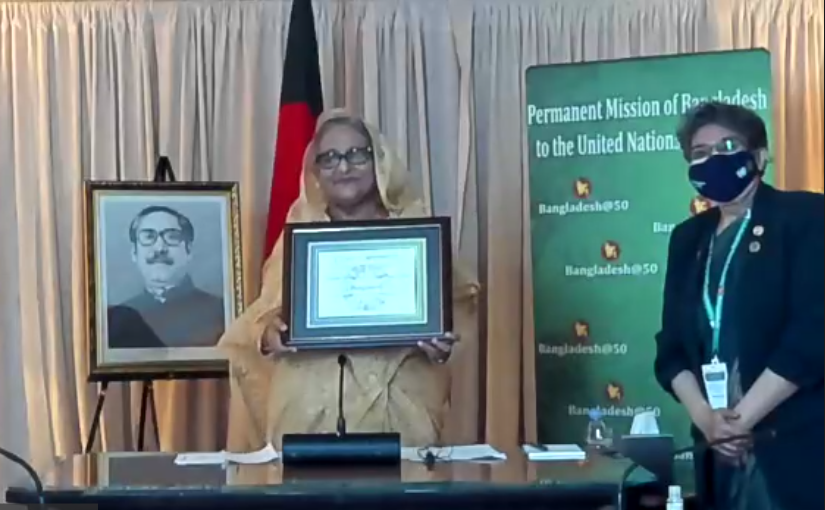 The UN-sponsored Sustainable Development Solutions Network (SDSN) has conferred Prime Minister Sheikh Hasina with “SDG Progress Award” for Bangladesh’s steady course in responding to the universal call to action to end poverty, protect the planet and ensure peace and prosperity for all.

“The honorable Prime Minister accepted the award saying she is dedicating it to the people of Bangladesh,” foreign minister Dr AK Abdul Momen said in a media briefing in New York on Monday (New York Local Time).

Led by prominent economist and development strategist Professor Jeffrey D. Sachs, SDSN was set up in 2012 under the auspices of the UN Secretary General.

The platform aims to mobilize global scientific and technological expertise to promote practical solutions for sustainable development and gauge the country-specific competitiveness in development performances.

The event’s moderator introduced Sheikh Hasina as the “jewel in the crown of the day” while Sachs appreciated her leadership in spearheading the SDG campaign even during the global COVID-19 pandemic.

According to Momen, Sachs said, “Bangladesh is doing miracle” while one of the international reports suggested the country secured the third position among the nations in achieving SDG targets.

Momen said the pandemic increased poverty in many countries but the social safety net programmes rather made vibrant the Bangladeshi economy through money circulation creating market demand.

“The award is a testimony of the endeavours engaged in achieving the SDGs. . . leaving no one behind,” he told the event.

The premier also took part in some other international events on UN General Assembly (UNGA) sidelines, one being a crucial closed-door meeting of heads of government on climate change jointly hosted by British Prime Minister Boris Johnson and UN Secretary General Antonio Guterres.