Statement by H.E. Rabab Fatima, Ambassador and Permanent Representative of Bangladesh to the United Nations in New York at the Security Council Open Debate on the Maintenance of International Peace and Security: Climate and Security, 23 September 2021 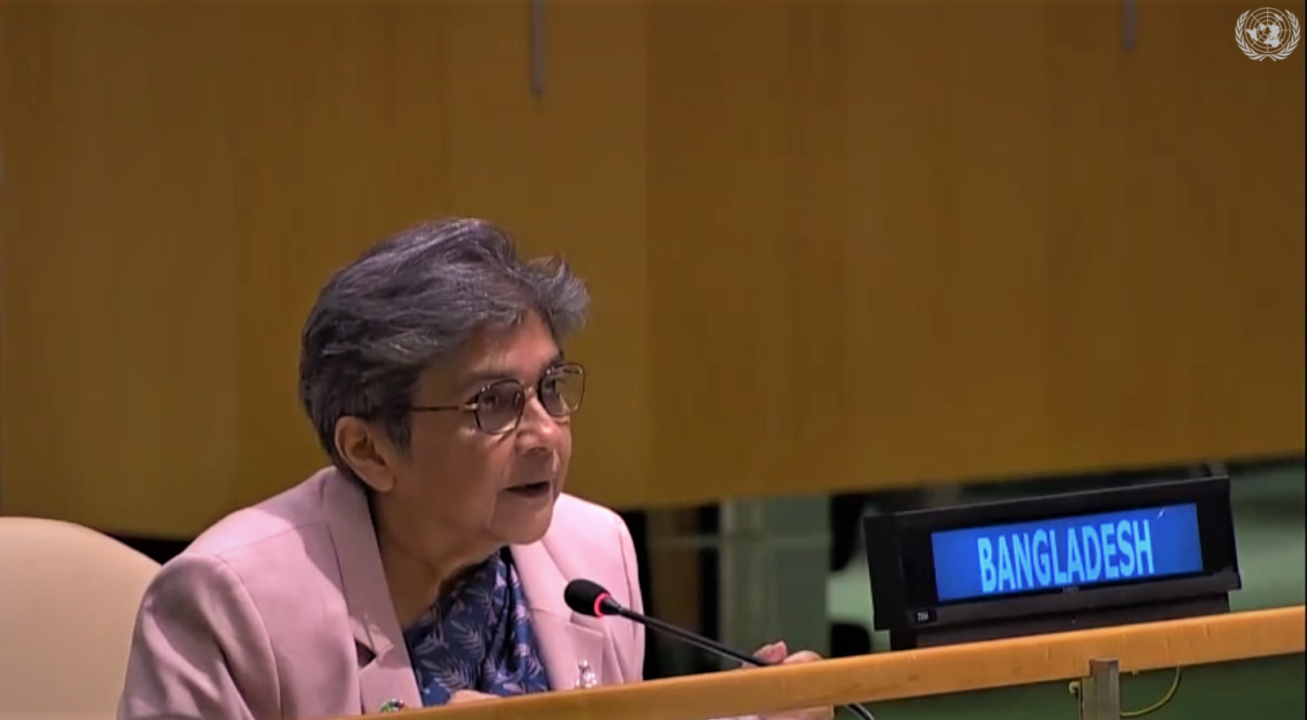 I thank the Ireland Presidency for convening today’s high-level open debate of the Security Council on the “Maintenance of international Peace and Security: Climate and Security.”

I also thank the UN Secretary General and other briefers for sharing their insights on this important issue.

This Open Debate is very timely. We have just concluded a close door roundtable convened by the Secretary General and the Prime Minister of the UK on the sideline of the high-level week of the 76th UNGA. And we are now preparing for a PGA-led high level Climate dialogue in October to build further momentum towards an ambitious outcome of the COP-26 in November.

Speaking at the close door dialogue, my Prime Minister highlighted the dire consequences facing the Climate Vulnerable Countries due to the double jeopardy of COVID-19 pandemic and climate induced disasters. She called for an ambitious action plan by the developed countries for reduced carbon emissions, fulfilling the 100-billion-dollar climate financing target, fostering technology transfer, and supporting green recovery, among other things.

The IPCC Sixth Assessment Report that came out last August predicts that the global temperature will cross the threshold of 2 degrees Celsius by 2100. This will cause irreversible damage to our planet. As such, climate change is an existential issue for all of us.  It can have security implications by putting pressure on shared and scarce resources, and induce large scale displacement; and thus, evolve as a source of political instability and sources of tension and conflicts.

We recognize these multifaceted risks posed by climate change. Yet we feel that an “alarmist” approach and over-securitization of the climate change discourse will not be helpful. It will divert attention from the essential interlinkage between climate change and global development.

The nexus between climate change and development is well-established. The Agenda-21, the 2030-Agenda, the Paris Climate Agreement, the Sendai Framework have recognized this linkage.  On the contrary, there is lack of any evidence-based conclusive connection between climate change and international security. Therefore, we believe that international development cooperation is the most effective way to deal with the adverse impacts of climate change.  Big emitters must go for rapid mitigation of GHGs. Also, there should be adequate resources and technology support to the most vulnerable countries to address the challenges.

Let me share a few specific thoughts in this regard:

First, we see climate change as a risk multiplier that may affect various dimensions of human security in climate vulnerable countries. It may create new risks or exacerbate existing ones by undermining food security, water security, energy security, livelihood security, etc. It is imperative to create opportunities for alternative livelihoods and encourage localized solutions to such pressing problems, especially to prevent or minimize population displacement.

Second, we need to factor in climate change impacts on sustained livelihoods, population displacement, and socio-economic shocks with the help of development and human security lens. The UN must take an evidence-based approach drawing on national and subnational sources of information to act appropriately.

Third, a high number of conflict-affected countries are also climate vulnerable. As such, the peacekeeping operations in the field must operate in the most climate friendly way. Their operational activities should place the “do no harm” principle high on their agenda in the context of climate change.

As the top T/PCC to the UN, Bangladesh is now leading the Group of Friends of for leading on environmental management in the field, which aims to raise awareness for reducing the environmental footprint of the UN peace operations in the field.

However, we see limited scope for peacekeeping operations to contribute to climate change issues. The security risks emanating from climate change are primarily non-traditional in nature. And those can be best tackled by enhancing global development cooperation.

Fourth, in a conflict situation, the impacts of climate change may interact with other drivers of fragility to further exacerbate human security challenges. The PBC with its mandate of peacebuilding and sustaining peace can play a crucial role in such contexts. Prevention at the source is key; and we recognize the important role that PBC is playing in supporting national efforts in this regard.

Finally, it is important to leverage on the synergies among the peace and development actors. The twin resolutions on peacebuilding and sustaining peace stress on such a cross-cutting approach. Ensuring adequate resources for climate actions should be a priority to support the climate vulnerable countries.