Statement by Mr. Md. Monwar Hossain, PhD, Deputy Permanent Representative of Bangladesh to the United Nations in New York on the agenda item 87: “Protection of Persons in the event of Disasters” 76th Session of the United Nations General Assembly, Sixth Committee, 18 October 2021 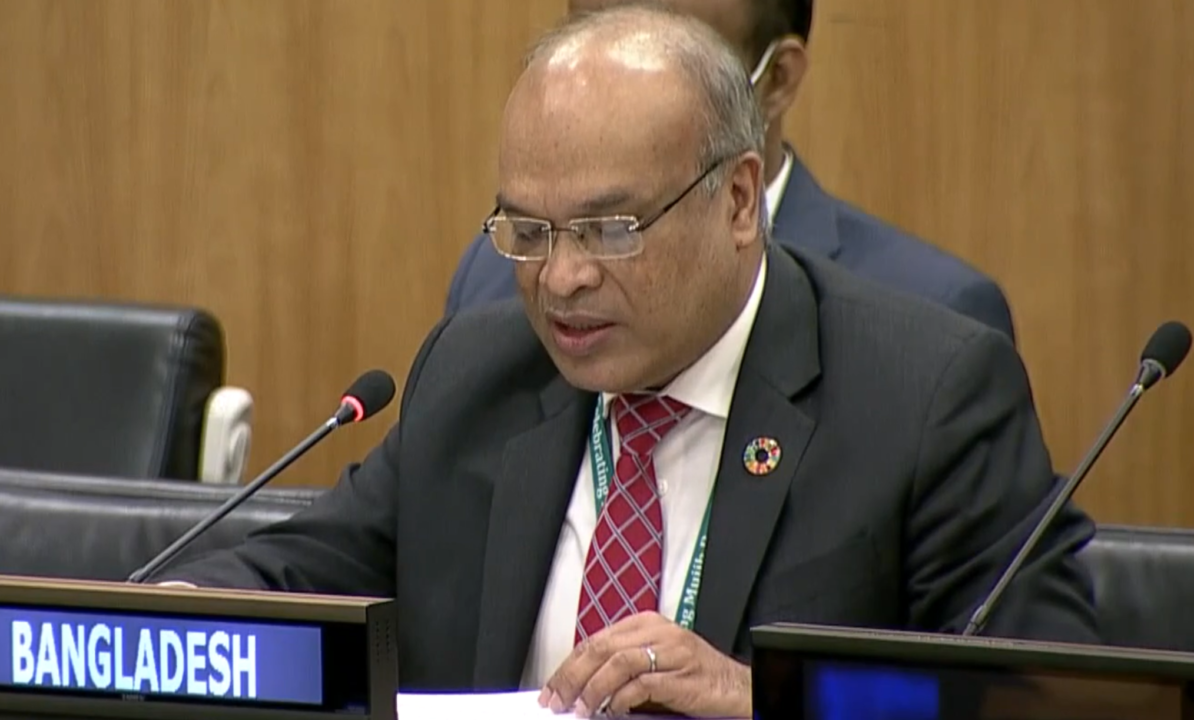 In the past 20 years, more than 7,000 major disasters have impacted all regions of the world, claimed 1.23 million lives and affected 4.2 billion people. The Intergovernmental Panel on Climate Change predicts that the intensity and frequency of natural disasters such as droughts and floods would continue to grow in future. It is, therefore, important to have a globally accepted legal protection regime to protect people from natural disasters.

As one of the most disaster-prone countries of the world, Bangladesh welcomes the recommendation of the International Law Commission to elaborate a convention, and in this regard, its draft articles on “Protection of Persons in the event of Disasters”.

We believe that the conclusion of such a convention will facilitate an effective and timely response to disasters, disaster risk reduction, and promote the rights and dignity of the affected people as well as address their need for assistance. It can also help achieve SDG 13 which calls for strengthening of resilience and adaptive capacity in responding to climate related hazards and natural disasters. However, such a convention would have to be in sync with, and bring synergies to the existing legal frameworks.

Bangladesh is one of the most climate-vulnerable countries in the world. Floods, tidal surges, cyclones, and river erosion are now more frequent than ever.  We faced several climatic disasters, including the Super Cyclone “Amphan” and monsoon flood that affected about 6 million people during the ongoing COVID-19 pandemic. Similarly, the cyclone “Yaas” inundated 27 sub-districts in May 2021 causing damage to crop, fisheries and infrastructure.

Due to geographic location, natural disasters are among the biggest challenges to the hard-earned development gains of Bangladesh. Yet, we have achieved remarkable progress in disaster preparedness including in rescue, recovery and protection of people in the event of disasters. We have in place the Disaster Management Act 2012; and a comprehensive National Plan for Disaster Management for the period of 2021 to 2025 in alignment with the United Nations Sendai Framework for Disaster Risk Reduction. This Plan is periodically updated.

The government has taken an initiative to build nearly a million disaster resilient houses for the landless, homeless and displaced families across the country. We have built 16.4 kilometres of sea dykes, 12,000 cyclone shelters and 2 hundred thousand hectares of coastal plantation. 56 thousand volunteers are available to facilitate preparation prior to any cyclone.

We have benefitted from the support of the international community in disaster management.  We are now pleased to share our good practices and locally led technologies and practices with other climate vulnerable countries, especially in the region.  International support, especially, technology transfer and financing would be essential in addressing disaster risk reduction and responding to disasters and climate hazards.

The draft articles of the International Law Commission provide a framework for disaster risk reduction that, among others, cover the duty of the affected State to ensure protection, as well as the role of international community in providing immediate assistance, at the request of the affected country. By and large, the draft articles cover the essential dimensions and elements of cooperation for the protection of persons in the event of disasters.

However, there is scope for improvement. In this regard, I wish to make the following points:

First, disasters include both natural and man-made ones and they are subject to different legal regimes. The convention on protection of persons in the event of disaster should therefore provide a clearer definition of disaster in its text.

Second, the draft articles cover the needs for assistance during, and in the immediate aftermath of the disasters. However, it is also important to address the long-term needs of the affected country as well as the affected people, especially those losing homes and properties or otherwise displaced.

Third, disasters exacerbate the vulnerability of those who are already in a vulnerable situation, such as, the poorest. Therefore, particular attention must be given to the need of the most vulnerable section of the society, including financial support for reconstruction and rehabilitation activities for the affected.

Fourth: disasters affect women and girls disproportionately. At the same time, women often appear to be the earliest responders to disasters. In Bangladesh one-third of the trained volunteers for disaster management are women. Protection of women and girls, as well as, women’s role, and full and equal participation in disaster management must be duly reflected in the convention.

Finally, I wish to conclude by reiterating our support for elaborating a convention on the “Protection of Person in the event of disasters”. We believe that the draft articles form a good basis to initiate the intergovernmental process. However, the text should be negotiated and adopted in a fully participatory manner so that it enjoys broad consensus.

I thank you, Madam Chair.