Statement by His Excellency Md. Mustafizur Rahman, Ambassador and Permanent Representative of Bangladesh to the United Nations and other Offices in Geneva on the Annual Report of the International Court of Justice, General Assembly Hall, UNHQ, New York 28 October 2021 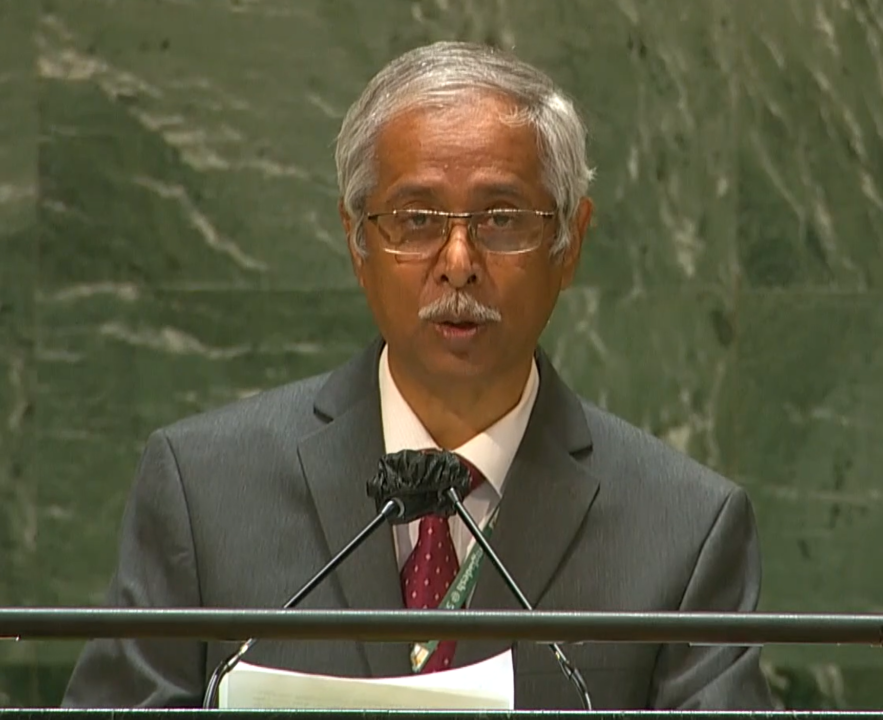 This year marked the 75th Anniversary of the sitting of the International Court of Justice.  As the principal judicial organ of the United Nations, it has been playing central role in promoting the pacific settlement of international disputes, upholding the rule of law at the international level and thus, contributing to the maintenance of international peace and security over the last 75 years.

We thank the President of the International Court of Justice (ICJ) for his annual report. The volume of the report is a clear testimony of the Court’s efforts to uphold rule of law at the international level at all times.

We also thank the Court for continuing its key judicial functions despite the challenges posed by the pandemic, including by adjusting its working method.

We take this opportunity to offer our heartfelt condolences to the Government and friendly People of Australia and ICJ family on the death of Judge James Richard Crawford on 31 May 2021.

Judge James Crawford was a great friend of Bangladesh and represented Bangladesh in the proceedings for delimitation of the maritime boundaries in the Bay of Bengal before he was elected a judge at the ICJ.

We recognize that over the years, the workload of the Court has increased manifolds. We therefore welcome the recent decision of the Court to establish an Ad-Hoc Committee to address it current workload.

We take particular note of the Secretary-General’s Report on his Trust Fund to assist States in the Settlement of disputes through ICJ. In this regard, we also welcome the decision of the Court to establish and administer a trust fund for the Judicial Fellowship Programme of the Court, which will grant fellowship awards to selected candidates from the developing countries.

We sincerely hope that the programme will be a useful tool in ensuring capacity of the jurists in developing countries. We would request the Court to ensure geographical and linguistic diversity while selecting the participants for the Programme.

We underscore the importance of upholding ICJ’s standing as the principal judicial organ of the UN, and of making enhanced use of its competence to de-escalate tension and prevent conflicts among Member States. We reaffirm the universal character of the Court’s jurisdiction.

We recall General Assembly’s call upon Member States to accept the Court’s jurisdiction in accordance with its Statute. We would also like to emphasize that cooperation from the Member States, including those related to specific proceedings, in the implementation of Court’s Judgments and Orders remain absolutely critical.

In keeping with our constitutional commitment towards peaceful settlement of international disputes, we have resolved our outstanding maritime boundary delimitation issues with the neighboring countries through international judicial means. In this regard, we continue to follow with interest the Court’s work on territorial and maritime disputes as well as conservation of natural and living resources.

As the Assembly is kindly aware, Bangladesh is currently hosting more than 1.1 million Rohingya minorities who fled atrocities in Myanmar. In this regard a legal proceeding has been initiated at the ICJ by The Gambia against Myanmar under the 1948 Genocide Convention, calling for protection of Rohingya population from genocide.

On 23rd January 2020, the Court has issued an Order indicating provisional measures against Myanmar. The Order concluded that the Court has prima facie jurisdiction to deal with the case. It also found that the Rohingya in Myanmar appeared to constitute a “protected group” within the meaning of article 2 of the Genocide Convention, and that there was a real and imminent risk of irreparable prejudice to the rights of the Rohingya in Myanmar.

As an affected country, Bangladesh welcomes the Orders of the Court. We call for full implementation of the Court’s Order by all concerned stakeholders.

Let me conclude by reiterating the unwavering commitment of Bangladesh authority of the International Court of Justice. We also reiterate our commitment to extend all cooperation to the Court in its functions.

I thank you Mr. President.