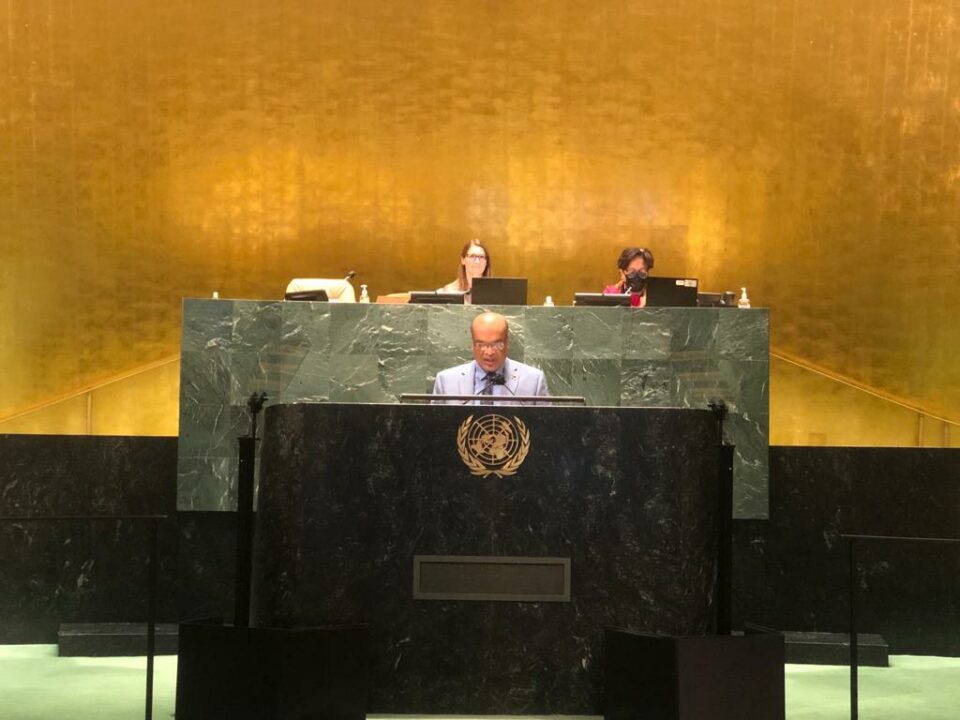 The significance of oceans for the survival of mankind is well-established. The oceans and their resources are the lifeline of a large majority of humanity. More than 3 billion people rely on the oceans for their livelihoods and over 80 per cent of world trade is transported by sea.

Today, unfortunately the oceans and their ecosystem are under threat from a wide range of factors, including climate change, sea-level rise, unsustainable fishing, pollution, and oil and gas extraction. The Covid-19 pandemic has further compounded the challenges. International trade by marine route decreased substantially. Seafarers have been heavily affected. So have been the world’s 9.4 million fishermen who lost their livelihood due to COVID. 90 percent of them belong to the developing countries.

In this backdrop, we welcome the reports of the UN Secretary-General, which have provided an account of the developments on ocean and law of the sea during the reporting period, and the progress made in the implementation of the 1982 UN Law of the Sea Convention.

I also take this opportunity to thank the facilitators of the two resolutions under this agenda item, which Bangladesh is pleased to cosponsor.

As a country with scarce land, importance of the sea and its resources are critical for Bangladesh. Recognizing the potentials of marine and the deep-sea resources, we have ratified the UN Convention on Law of the Sea in 2001, and since then we have taken significant efforts for its implementation. We have resolved our maritime boundary disputes with neighboring countries in accordance with Chapter XV of UNCLOS. We have also provided technical and scientific information to the Commission on the Limits of the Continental Shelf in support of our outer continental shelf in the Bay of Bengal. Bangladesh is an active member of the Council of International Seabed Authority and currently the President of the Council.

At the national level, we have updated our national legislation to bring it in conformity with UNCLOS. The newly enacted Maritime Zones law addresses all aspects of the oceans and law of the sea, including efficient utilization, conservation and scientific management of our marine resources.

As a low-lying coastal country, Bangladesh attaches high importance to the health of the ocean. Climate induced sea-level rise is going to have devastating impact on the lives and livelihoods in Bangladesh. One-meter sea-level rise can submerge approximately 40 percent of the southern part of Bangladesh resulting into displacement, food insecurity and economic loss.

Recognizing this, Bangladesh has undertaken several initiatives to mitigate the adverse impact of climate change on the health of oceans. Our Climate Change Strategy and Action Plan as well as other measures includes conservation of marine environment, among others.

The ocean is our global ‘commons’. Our common future will thus be significantly determined by the way we conserve, develop and tap into oceanic resources and services.  I wish to make a few points in this regard:

First, the devastating impacts of climate change on the oceans is apparent.  Ocean warming, sea level rise and exacerbated natural disasters, devastate human lives and livelihoods, particularly in vulnerable coastal communities, as well as marine and coastal life and ecosystems, and these are expected to worsen. To address the impact of climate change on ocean, integrated, collaborative action will be essential, including cross-agency action at the global level.

The notion of integrated collaboration has been recognized in the recently concluded Glasgow Pact. However, more needs to be done for the protection of the marine environment. In this regard, we look forward to the upcoming Ocean Conference in Lisbon in June next year.

Second, to ensure a balance between the equitable and efficient utilization of ocean resources, the conservation of marine resources, and the protection and preservation of the marine environment, it is imperative to ensure early conclusion of the BBNJ agreement. We hope that the 4th Session of the BBNJ scheduled to take place in first half of 2022, will come up with a productive outcome in this regard.

Third, we need to redouble international cooperation to address the continued threats to maritime security, such as piracy, armed robbery, kidnapping and smuggling of migrants through sea. In this regard, we call upon the member States to strengthen international cooperation to address these challenges as well as to comply with their obligations for search and rescue at the sea, and to work towards addressing root causes of these security threats.

Fourth, capacity building and technical assistance remain crucial for the implementation of legal and policy framework for the oceans and seas, particularly for the developing states. We appreciate the efforts of DOALOS to assist developing countries in implementing the Convention and its implementing agreements and promoting strengthened, sustainable and inclusive ocean economies, including by taking into account the constraints posed by the pandemic.

Finally, to recover from the impacts of Covid-19 on ocean economy and build back better, we must encourage and foster integrated cooperation and coordination at international, regional and local levels, especially in support of the developing and small island states, and coastal communities.

To conclude, Mr. President, we would like to reiterate our commitment to UNCLOS which remains the principal instrument for all activities in the oceans and seas. We call upon all remaining States to join the Convention to achieve its universality.