Statement by H.E. Rabab Fatima Ambassador & Permanent Representative of Bangladesh to the United Nations in New York at the virtual Launching event of the International Gender Champion Network’s Impact Group on Research and Ocean for Women (IGROW), 07 June 2022 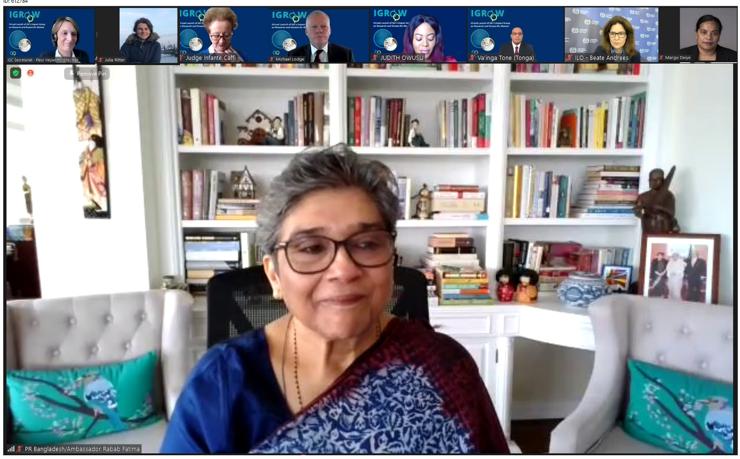 President of the General Assembly,

A very good morning to you all.

I thank Secretary-General Michael Lodge and Ambassador Tone for convening this meeting of the Impact Group on Research and Oceans for Women (IGROW). I commend you both for your leadership on this important issue.

I thank the distinguished speakers for their insightful remarks.

It is well known that women are under-represented in STEM. This is all the more evident in ocean affairs. According to UNESCO, women account for only 38% of the world’s researchers in ocean science, and the rate is even lower for women from the developing countries.

Women continue to be disproportionately impacted by marine pollution and disasters emanating from ocean warming than men, due to their unequal access to resources to build resilience against those calamities.

In view of the above, the initiative to form the Impact Group on Research and Ocean for Women (IGROW) is very timely. In fact, it is long-overdue. The International Gender Champion Network deserves our sincere commendation for this initiative.

Ending gender inequality is essential to achieving the ocean-related goals and targets of the 2030 Agenda for Sustainable Development.  Allow me to share a few thoughts in this regard:

First, women’s equal participation needs to be mainstreamed in all ocean related discourses as an overarching priority. All policies and programmes undertaken in the areas of marine science must have a gender perspective as a first step to ensuring gender parity in the ocean governance. This enable them to play their rightful role in exploring, protecting and sustainably managing our oceans.

Second, capacity building is essential for advancing women’s participation in all ocean related activities. We appreciate the leadership of ISA in promoting women participation in marine scientific research, particularly in the LDCs, LLDCs and SIDs. We greatly appreciate in this regard the support being extended to the LDCs, where the role and participation of women scientists is being enhanced through its various programs including its “Women in Deep-Sea Research (WIDSR)” project. [Since 1994, approximately 300 women have benefited from various programs of ISA including its several Voluntary Commitments registered at the 2017 UN Ocean Conference.]

I call upon other UN entities to scale up efforts to build the capacity of women in marine science, including by investing in building appropriate institutions in the developing countries.

Third, as women are more vulnerable to the adverse impact of ocean-warming and face the risks of ocean degradation, we must work to enhance their access to resources to build resilience against those vulnerabilities. Their indigenous knowledge on adaptation and mitigation against climate change and other related threats to ocean environment needs to be nurtured. The group can lend its support to the initiatives of other international bodies in this regard, including those of the Commission on the Status of Women.

As the President of the UN Women Executive Board, I shall also promote greater complementarity between the work of the UN Women and Impact Group with a view to advancing the participation of women in ocean affairs.

Finally, the group needs to engage with other stakeholders such as the civil society, academia, ocean science community, research institutions and women’s organizations to work collectively to advance women’s leadership and equal participation in ocean governance.

We once again thank you for inviting me to this meeting. I wish this group all e success and assure you all of my full support and cooperation to fulfill its objective.