Statement by H.E. Dr. A K Abdul Momen, MP, Hon’ble Foreign Minister of Bangladesh at the General Debate of the 10thReview Conference of the Nuclear Non-Proliferation Treaty (NPT) 01August 2022 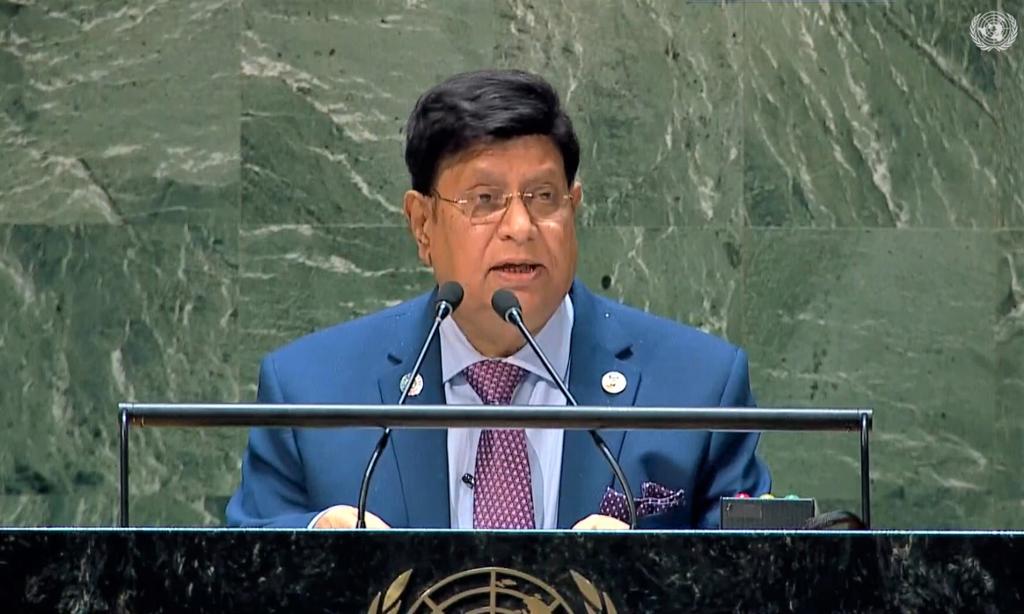 I would like to congratulate you on your election as the President of the 10th Review Conference of the Treaty on the Non-Proliferation of Nuclear Weapons (NPT). I assure you of the fullest cooperation of my delegation in discharging your responsibilities. We are hopeful that, under your able leadership, the Conference will serve as a landmark for garnering more active cooperation and partnership for our nations on non-proliferations issues.

Bangladesh aligns itself with the statement of the Non-Align Movement (NAM), delivered by the Republic of Azerbaijan.

Bangladesh acceded to the NPT on 27th September 1979. We remain committed to the full implementation of all its aspects. This commitment emanates from our constitutional obligation. The Father of our Nation Bangabandhu Sheikh Mujibur Rahman, in his historic maiden speech at the UN General Assembly in 1974, made a clarion call to emancipate the world from the scourge of nuclear war. That forms the cornerstone of Bangladesh’s total and unwavering commitment to general and complete disarmament of nuclear weapons.

Born out of the horrors of the Second World War, the UN envisioned a world free of nuclear weapons in its very first resolution. Seventy-six years have since passed. Yet, nuclear weapons pose the greatest threat to humankind. The advancement of artificial intelligence, emerging technologies, and cyber operations has made it even more dangerous. In the current geopolitical situation of the globe leading to a new cold war, we are afraid, the risk of the usage of nuclear war no longer remains as a distant one.

We firmly believe that the ultimate guarantee of international peace and security lies in the total elimination of nuclear weapons.  Allow me to highlight some specific thoughts in this regard:

First: The international community must recognize the dehumanizing and devastating consequences of nuclear weapons. This is imperative that the international community unite against the perpetual holding of nuclear weapons by a handful of states in total disregard of the safety and security of humanity. Towards that end, we urge the nuclear-weapon states to fulfill, in good faith, their long-overdue legal obligations under Article VI of the NPT, and also comply with their undertakings in line with the 13 practical steps under the 2010 action plan on disarmament of nuclear weapons, in particular Action 5, to accomplish the total elimination of their nuclear weapons.

Second: As I mentioned already, to demonstrate our unflinching commitment to the total elimination of nuclear weapons, we were among the first few countries to ratify the Treaty on Prohibition of Nuclear Weapons (TPNW). We welcome the coming into force of the Treaty on 22 January 2021; and the First Meeting of States Parties of the TPNW and its landmark 50-point Vienna Action Plan. We believe TPNW will serve as a critical component in strengthening the NPT.  We call upon States that are yet to join TPNW, to do so without any delay, to attain universal application of this Treaty. We would like to see, as a matter of priority, its full implementation by all, including the Nuclear-Weapon-Possessing States and Nuclear-Umbrella States.

Third: We support the effective implementation of the NPT through its three pillars, namely, nuclear disarmament, non proliferation and peaceful use of nuclear energy. In this regard, Bangladesh emphasizes the non-discriminatory implementation of Article IV of the Treaty, which recognizes the inalienable rights of all States to develop, research, produce, and use nuclear energy for peaceful purposes, including in power generation, healthcare and agriculture.

We call for increased investment and international cooperation in the research of nuclear technology and explore the potentials of its peaceful use for the benefit of humankind.

Fifth: We stress the need to scaleup our efforts for the rapid entry into force of the CTBT and commencing negotiations on Fissile Material Cut-off Treaty (FMCT). Indeed, we remain deeply frustrated with the long-standing stalemate in this regard in the Conference on Disarmament (CD) in Geneva. We also reaffirm the critical importance of Nuclear-Weapon Free Zones (NWFZs) for the NPT regime.

Sixth: the pandemic has reinforced our belief that weapons do not save lives. Yet, in 2021, 82.4 billion US dollars were spent to upkeep nuclear weapons even amid a pandemic. Sadly, that could otherwise be better used to protect our planet and people. We urge the States to stop senseless investments in destructive nuclear weapons and instead re-direct these resources to promote health, address climate change, achieve the SDGs, and promote peace and stability.

Finally, Mr. President, we hope that 10th NPT Review Conference would produce an outcome that would facilitate the universality and implementation of the Treaty to make the world free from the threat of nuclear weapons. This is imperative for us in order to assure a better and safer world for our next generations. My delegation stands ready to work together to make the 10th NPT Review Conference a success.