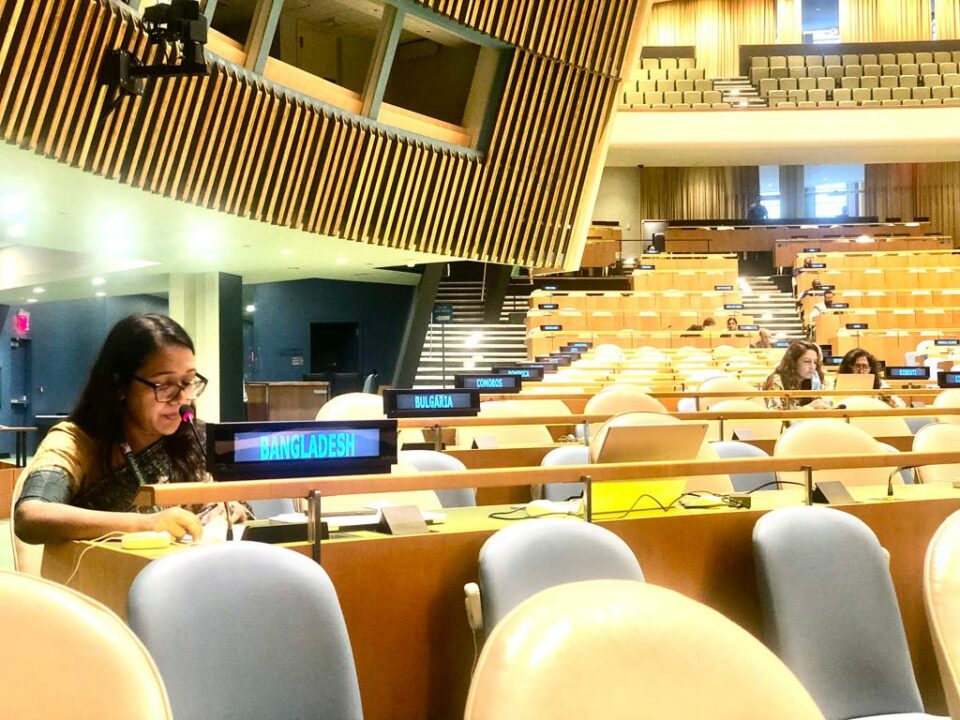 Let me begin by expressing our deep appreciation to the President of the General Assembly, His Excellency Abdulla Shahid for convening this year’s High Level Forum on The Culture of Peace.

I also wish to thank all the distinguished speakers for their insightful remarks at the inaugural session.

For a long time, the idea of peace was contingent upon the outcomes of war.  The saying was, “if you want peace, prepare for the war.” This mindset led societies to adopt a culture of war. People had to live with constant fear of war and support a particular war for their survival. Peace was nothing more than absence of war.

We need to see this concept obsolete now. When the United Nations was born, it not only determined to stop wars, it pledged to pursue life in a larger freedom, reaffirm faith in human rights, equality of nations and between men and women, and establish conditions where justice and rule of law can prevail.

This requires a profound cultural transformation and a shift in the mindset. For over two decades now, the General Assembly has adopted resolutions that called for inculcation of a culture of peace and non-violence, and integration of principle of justice, solidarity and respect for all as a way of life.

Culture of peace is inextricably linked to our foreign policy vision. We believe, [as stated by our founding father Bangabandhu Sheikh Mujibur Rahman] “Peace represents the deepest aspirations of men and women throughout the world”. And from the very moment of our birth as a nation we have “committed ourselves building of a world order, in which the aspiration of all men for peace and justice will be realized.”

This very commitment guided us in 1999 to introduce the GA resolution on “Declaration and Programme of Action on a Culture of Peace”. Through this resolution, this Assembly outlined the important role governments have in promoting and strengthening a culture of peace. Since then, this resolution and the High Level Forum has been advocating for promotion of the values of culture of peace in tackling the most pressing challenges facing the humanity.

We live in a time when our world is tangled up in cascading and interlinked global crises. The world witnessed the largest number of violent conflicts since 1946; with one quarter of the global population has been living in conflict-affected countries. These persistence and proliferation of violence and conflicts around the world is due to, among others, rise in inequality, lack of social justice, and hate speech, xenophobia, and intolerance. The pandemic has further exacerbated the existing societal challenges to peace and security.

Against this backdrop, the theme of this year’s high-level forum – “The Culture of Peace: importance of justice, equality, inclusion for advancing peacebuilding” cannot be timelier.

Long-term peace requires eliminating the root causes of conflict, restoring relationships, and creating a social system that meets the needs of the community and reduce conflict risks.

The current peacebuilding architecture of the UN, as transformed through the concept of sustaining peace, offers a viable means for promotion of positive peace. It promises to prevent the outbreak, escalation, continuation and recurrence of conflicts and end hostilities by addressing their root causes. This requires efforts towards transforming attitudes, institutions and structures that lead to peaceful societies. Such efforts cannot be advanced without ensuring justice, equality and inclusion.

Since the adoption of the 2016 twin resolutions on peacebuilding and sustaining peace, the UN has prioritized prevention. This has been further amplified by the new agenda for peace proposed by the Secretary General in his Our Common Agenda Report.

As the current Chair of the UN Peacebuilding Commission Bangladesh remains committed to utilizing the PBC’s unique platform in materializing this vision, including by strengthening the national ownership and inclusivity.

Today 71 percent of the world population lives in countries where we are witnessing growing inequality. The COVID-19 pandemic has made it worse. Countries with existing vulnerability are facing layers of challenges in meeting the needs of their citizens – in education, employment as well as in providing basic services. Most recently, due to the energy and financing crisis, the sufferings of the developing countries have further accentuated.

These visible inequality causes conflict and violence around the society and disrupts the overall development efforts. In order to create an peaceful global society, we must continue to invest in efforts towards eliminating inequalities within and among the societies.

We must also strive to end inequality and injustice within the society. All segments of the society must be engaged in pursuing a common vision of sustainable peace. Implementation of women, peace and security agenda including in the context of human security is critically important. At the same time, greater investment is needed to create equal opportunities for youth, and transform them as agents of peace. The UN Peacebuilding Commission’s role is critical in this regard.

We need to redouble our effort to strengthen institutions at the local, national and global levels to ensure justice and promote rule of law. Equally important is to promote dialogue, aiming at bridging divides and discrimination across and within societies, and fostering peaceful settlement of disputes, harmony and non-violence.

To conclude, I call upon all member States, the United Nations system and global community to continue to advocate for full implementation of the programme of action on a culture of peace at all levels and promote its core values in their efforts to build and sustain peace.