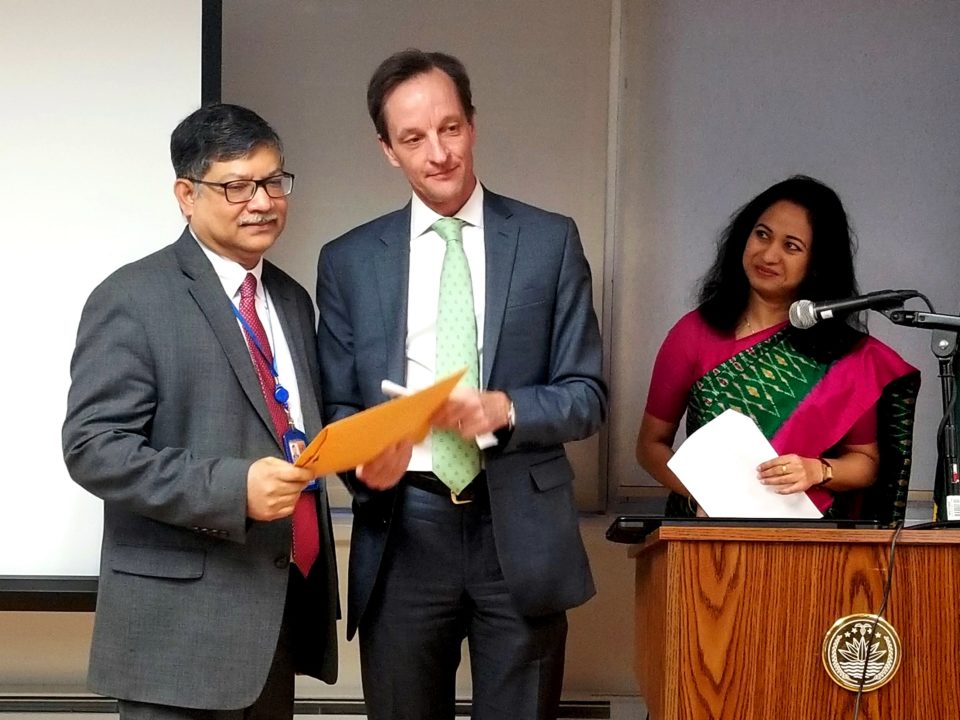 The United Nations Committee for Development Policy, on completion of its review of the LDC category, announced on 15 March 2018 that Bangladesh has met the graduation criteria for the first time. Today, Mr. Roland Mollerus, Chief, Secretariat of the Committee for Development Policy (CPD) handed over to the Permanent Representative of Bangladesh Ambassador Masud Bin Momen an official letter conveying this announcement at a simple event organized at the Bangabandhu Auditorium of Bangladesh Mission.

The event started with the screening of a short documentary on Bangladesh’s development trajectory. The documentary vividly captured the background stories of Bangladesh’s attaining rapid, inclusive and sustainable development under the current political leadership. Launching of our own satellite “Bangabandhu-1” in less than 50 years of achieving independence will be the ultimate testimony of the progress of the country. The visual of a successful development story started with the visionary leadership of the Father of the Nation Bangabandhu Sheikh Mujibur Rahman when he congregated the whole nation for a legitimate struggle for independence by overruling the-then oppressor regime in 1971. Then the documentary takes us on a ride through the memory lane which portrayed the progressive efforts of Bangabandhu to build the “Golden Bangla”- a peace-loving and prosperous country that he had always dreamt of. This dream of Bangabandhu set the momentum for a war-ravaged country for its nation building and guided its pursuit for inclusive growth, through an ambitious transformation from reconstruction to development. The documentary also highlighted the dynamic leadership and long term vision of Prime Minister Sheikh Hasina which marked Bangladesh’s ‘role-model’ performances in attaining MDGs, and its robust commitment to implement the SDGs by achieving remarkable socio-economic progress in the areas of poverty alleviation, food security, health, education and gender equality. It shows considerable increase in life expectancy, export oriented industrialization, setting up of 100 EPZs, and development in RMG and Pharmaceutical sectors in the country. It also sheds lights on government- sponsored mega projects such as Ruppur Nuclear Power Plant, Paira Deep Sea Port, Padma Multi-purpose Bridge and Dhaka Metro Rail. The documentary ended with the ardent call of the Prime Minister to rise beyond all divisions for the sake of building a happy, prosperous and developed Bangladesh for the generations to come.

In his statement, the Permanent Representative of Bangladesh to the UN Ambassador Masud Bin Momen said, “It’s a historic day for us. I am delighted to inform you that Bangladesh has fulfilled the criteria for graduation from the LDC category for the first time”.

It may be mentioned that the UN Committee for Development Policy (CDP) determines the graduation of a least developed country from the LDC category on the basis of its meeting at least two of the three criteria which are Per Capita GNI, Human Asset index (HAI) and Economic Vulnerability Index (EVI). Bangladesh could meet all the three criteria in this year’s review by the CDP. Its per capita GNI is USD 1610 whereas this year the threshold set by CDP for this year was USD 1230. The HAI of Bangladesh is 72.9 whereas the threshold was 66. The EVI of Bangladesh is 24.8 whereas the threshold was 32.

Mentioning that from the war-ravaged country to today’s graduation has been a bumpy ride, Ambassador Masud said, “It has been possible due to the visionary leadership of our Hon’ble Prime Minister Sheikh Hasina. Under her leadership, Bangladesh adopted bold and forward-looking development strategies which yielded rapid but inclusive economic growth, structural transformation and remarkable social progress”.

The Permanent Representative stated, “Graduation of half of the LDCs by 2020 is one of the major objectives of the Istanbul Programme of Action for LDCs and it is also an imperative for the realization of the 2030 Agenda as well as for long lasting peace and prosperity”.

Ambassador Masud mentioned, “We are committed to leave no one behind in our aspiration for peace, progress and prosperity. ‘Digital Bangladesh’ is no longer a slogan only for us; the people across the country are getting its benefits. ICT has been our tool to improve governance and implement national development plans”.

The Permanent Representative informed the audience that Bangladesh has set a goal to establish itself as a middle-income country by 2021 and a developed and prosperous country by 2041. In this connection he said, “It was our long-cherished aspiration that we would take our country to a new height of development. Bangladesh’s GDP has been growing at 7.28% now. We have aligned our national development plans with the SDGs. We are also committed to implement the SDGs. Our graduation aspiration has coincided with all these visions”.

Ambassador Masud also mentioned that this graduation process of LDCs bears the hallmark of the collective success of the UN and the international community. He acknowledged the excellent cooperation that Bangladesh received from its development partners, including the UN system, in support of its national endeavours. The PR hoped that Bangladesh will continue to receive similar support from its development and trading partners to make its graduation sustainable and also for the achievement of the 2030 Agenda through strengthened partnerships.

Ambassador Masud also mentioned of Bangladesh’s readiness to share with the LDCs its experience and best practices in its development efforts.

Among the speakers, following the handover of the CDP’s decision to the PR, the CDP Chief Mollerus remarked that the impressive successes of Bangladesh in GNI, HAI and EVI made the work of CDP easier while reviewing Bangladesh’s status. He acknowledged that the robust development policies of the Government of Bangladesh had driven this progress.

Chair of CDP Expert Group, Professor Ocampo, told that Bangladesh has an impressive history of success. He added that it has a very dynamic export sector, human asset and significant improvement in education and health sectors.

USG and High Representative Ms. Utoikamanu mentioned that solid foundations have been built in Bangladesh to reduce poverty and advance development. The extreme poverty level has come down to 14% and economic growth has been robust for many years in a row. She also said that ‘Vision 2021’ has been guiding Bangladesh’s national development endeavours to turn it into a middle income country.

All the dignitaries congratulated Bangladesh on its meeting the graduation criteria from the LDC category and spoke very high of its remarkable strides in accelerating inclusive social and economic development. They also praised our visionary leadership and consistent good performance.