High-level Event on the Global Compact on Refugees: A Model for Greater Solidarity and Cooperation 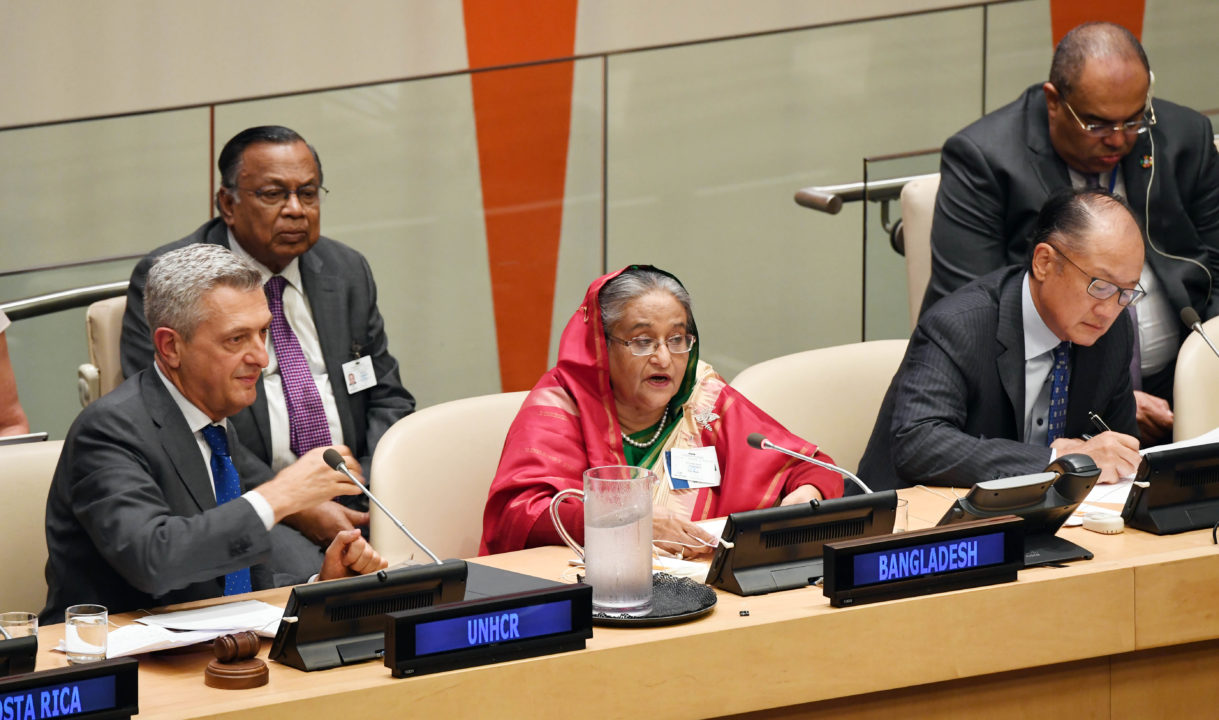 I thank the United Nations High Commissioner for Refugees for inviting me to this meeting on the Global Compact on Refugees.

I am happy to see that the commitments of 2016 New York Declaration on Migrants and Refugees are becoming realities with finalization of both the Compacts. These two compacts – one on refugee and other on migrants are complementary to each other and we hope necessary synergies will be drawn by the agencies while implementing.

Refugees are among the most vulnerable people in the world. I myself was refugee twice; first during our liberation war in 1971; when my father, the Father of the Nation Bangabandhu Sheikh Mujibur Rahman was arrested and taken to Pakistan. I along with my mother, sister and brother was confined in a house. At that time I was expecting my first child who was born in captivity.

Second time, in 1975 when my father along with 18 members, including my mother, three brothers, the youngest one of 10 year-old, two sister in laws, and uncle, was brutally assassinated on 15 August in 1975. I and my younger sister had to take refuge abroad for six years till 1981.

Now in Bangladesh, we are faced with the largest forced movement in shortest time of over 1.1 million traumatized Rohingyas. They have been forcibly displaced from their homes in Rakhine State of Myanmar where they had been living for centuries.

While we are providing them with basic necessities, the magnitude of the problem has posed serious challenges for us. We have allocated over 6000 acres of land. Diversion of human and other resources for Rohingyas has taken toll on our society, environment and economy.

The international partners, especially the UN agencies, have been helping the Rohingyas. Regrettably the current UN joint response plan of 2018 which requires USD 950 million has remained severely underfunded with only 33% funding secured. Humanitarian and development support of the international community for the Rohingyas and other affected communities must be predictable and in the spirit of international responsibility sharing.

The Compact on Refugees has been adopted at a time when the world is faced with swelling refugee crisis. Innocent people from the various conflict-torn countries are leaving their homes for safety and security while many countries like Bangladesh are giving them shelter, protection and hope.

Most of these refugee hosting countries are developing countries with their own set of challenges. Yet they respond to the call of humanity. The world must recognize their contribution and help those countries shoulder the burden. The world leaders must come forward with political will and commitment.

We must not forget that every refugee desires a safe return to his/her homeland. The displaced people from Myanmar have to return to their homes in safety, security and dignity. Having lived life of a refugee, I know how I spent each day waiting for my return to my own country.

Safe and sustainable return to the country of origin is particularly important to resolve protracted refugee crisis. Greater attention needs to be paid to remove the root causes that drive people refugee, and those root causes lie in the countries of origin.

The realization of the Compact should exhibit stronger commitment in addressing those root causes; rather than focusing on response to an emerging situation only.

First, Myanmar must abolish discriminatory laws, policies and practices against Rohingyas and address the root causes of forced displacement in a genuine and timely manner.

Second, Myanmar must create a conducive environment by building trust and guaranteeing protection, rights and pathway to citizenship for all Rohingyas. If needed, create a “safe zone” inside Myanmar to protect all civilians.

Third, prevent atrocity crimes against Rohingyas in Myanmar by bringing accountability and justice, particularly in light of the recommendations of the Fact-Finding Mission of the UN Human Rights Council.

Let me reiterate that Rohingya crisis has been originated in Myanmar and the solution has to be found in Myanmar. As a responsible government, we have opened our border and provided shelter to the forcibly displaced Rohingyas. By doing so, we have not only saved lives, we have stabilized the entire region by containing the crisis within our border.

However, we would like to see the Rohingyas returning to the homes in safety, security and dignity. Pending their return, we are trying to address their basic needs. Given scarcity of land and other socio-cultural and environmental impacts, we are going to relocate them to a newly developed island called Bhashan Char where they will have better living conditions and livelihood opportunities. In the absence of any policy of local integration in Bangladesh, Rohingyas need to secure their future in their own country Myanmar.

I urge international community to help us achieve that.