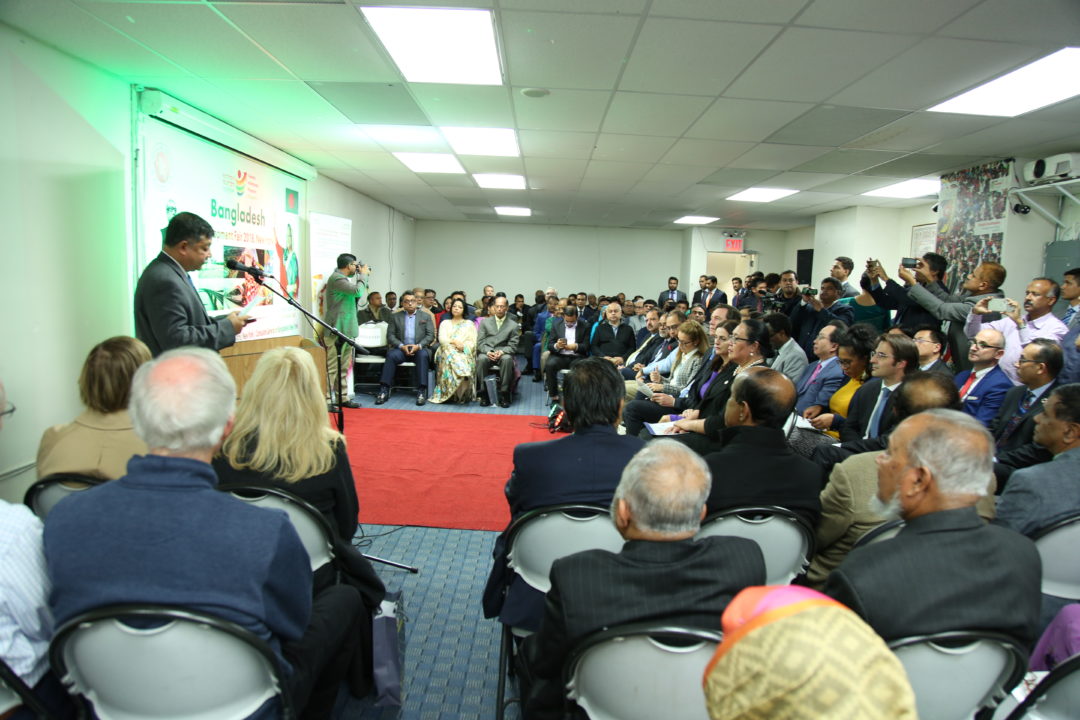 The event began with the screening of documentaries showcasing an ‘Indomitable Bangladesh’ and its development trajectory. The cultural segment featured a dance number performed by a renowned local cultural group ‘Nrittanjali’ paying tribute to the Greatest Bangalee of all times, Father of the Nation Bangabandhu Sheikh Mujibur Rahman and martyrs of Bangladesh’s Liberation War. They also danced to the tune of popular patriotic songs. Recitation of Bangla poem by expatriate artist SAM Muktadir and several Bangladeshi songs rendered by Sree Chinmoy Group were other highlights of the cultural programme which enthralled the audience.

In her statement the chief guest of the event, Ms. Fekitamoeloa Katoa ‘Utoikamanu projected the resolute development journey of Bangladesh and highlighted the various achievements of Sheikh Hasina’s government such as robust economic growth, strong national ownership, leadership, planning & implementation capacities, institutions, rapid industrialization & economic diversification. She said, “Bangladesh is now branded as ‘one of Asia’s most remarkable success stories”.

Mentioning Prime Minister Sheikh Hasina’s visionary leadership in the way to success, the Permanent Representative Ambassador Masud Bin Momen said, “Bangladesh, emerging like a phoenix from the ashes of a bloody War of Liberation, is currently considered to be one of the developing world’s greatest success stories. This is a fitting testimony to our achievements under Hon’ble Prime Minister Sheikh Hasina’s leadership who has led the country from the front to fulfill the dream of ‘Sonar bangla’ as envisaged by the Father of the Nation Bangabandhu Sheikh Mujibur Rahman”. He also highlighted Bangladesh’s successes at the United Nations in various fields.

Consul General of Bangladesh Ms Sadia Faizunnesa delivered the welcome remarks. In her remark, she said, “I just want to flag to you all on what did our Father of the Nation Bangabandhu Sheikh Mujibur Rahman meant by ‘Sonar Bangla’. Sonar Bangla is not only increase of per capita income of people, it’s a bottom-up approach of inclusive Development. It is about people’s progress, people’s enlightenment and people’s empowerment”. She enumerated several development achievements of Bangladesh before the audience. She thanked expatriate Bangladeshi for contributing country’s development and urged to invest more in the development of Bangladesh.Highlighting comparative development indicators between Bangladesh and others south Asian Countries Dr. Selim Jahan, Director of Human Development Report Office of UNDP mentioned Bangladesh’s development is unprecedented among all of its neighbors. Mentioning Bangladesh as an important development partner and the closest neighbor, Consul General of India in New York Ambassador Sandeep Chakravorty said, “India would always stand besides Bangladesh’s development. Bangladesh is an example for not only south Asia but for the entire world. This has been possible due to Prime Minister Sheikh Hasina’s foresight and stewardship”.

Other speakers were also lavish in their praise about Bangladesh’s socio-economic development under the dynamic and pragmatic leadership of Prime Minister Sheikh Hasina.

The Fair venue was tastefully decorated with publicity materials highlighting the achievements of Sheikh Hasina’s government. The Development Fair was deeply appreciated by the attending Bangladesh diaspora, foreign diplomats and representatives of US administration alike.