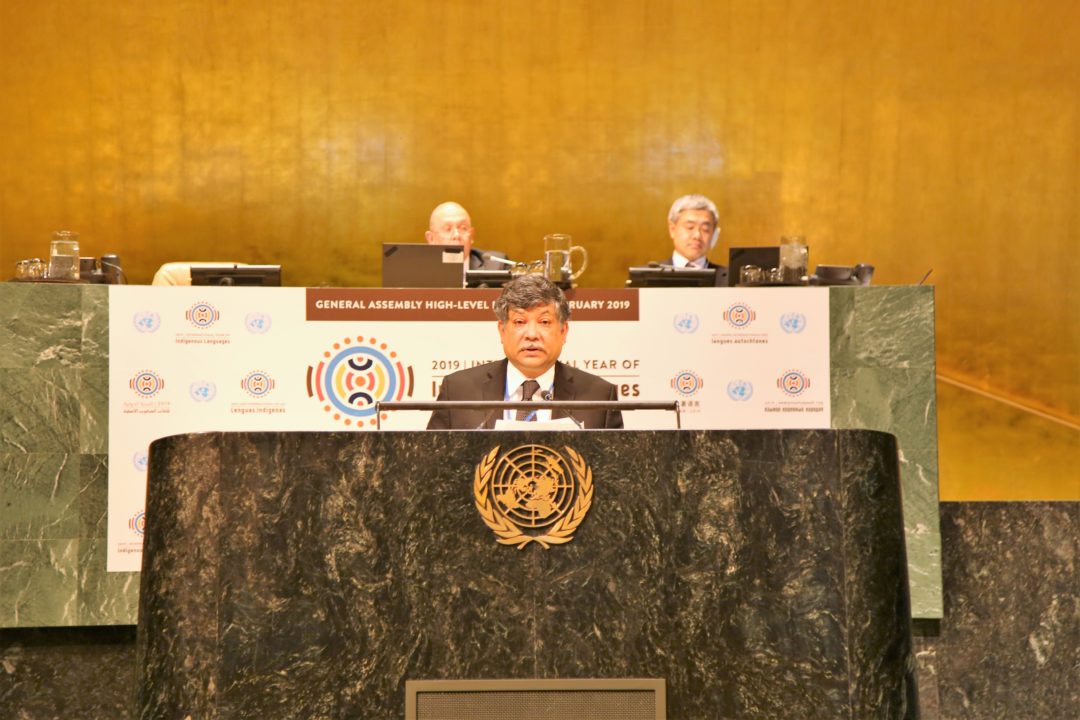 “The spirit of the sacrifice of our sons of the soil to uphold their mother tongue on 21 February 1952 drives us in our unwavering commitment to promoting inalienable right of people across the globe to their mother languages as well as the importance of linguistic and cultural diversities. It was due to Bangladesh’s initiative that UNESCO declared 21 February as International Mother Language Day” –said Permanent Representative of Bangladesh to the UN Ambassador Masud Bin Momen at the High-Level plenary meeting of the General Assembly for global launch of the International Year of Indigenous Languages, today.

“We are happy to see that this year’s IMLD observance is coinciding with this auspicious occasion of observance of “2019 International Year of Indigenous Languages”. Both the observances are related to languages and therefore, would complement and contribute to the wider activities planned so far. Languages and cultures are great enablers of promoting a culture of peace. This year being the 20th anniversary of the adoption of the Declaration and Programme of Action on a Culture of Peace, it is also a great occasion to celebrate our unity of purpose” –said Ambassador Masud.

Mentioning the Prime Minister Sheikh Hasina’s commitment to build an inclusive society in Bangladesh strides towards peace and development, the PR said, “We are working to preserve and promote the identity, languages, culture, land and resources of our own ethnic minorities. We have ensured that in our various relevant acts, policies and programmes as well as development planning and endeavours, their rights are protected. In recognition of those initiatives, our Prime Minister Sheikh Hasina has been awarded the Cultural Diversity Medal by UNESCO”.

Citing example, Ambassador Masud said, “We have set up seven specialized cultural institutes including three in the three hill districts that will facilitate promotion and preservation of culture, heritage, languages, and tradition including that of small ethnic communities. We have an ‘International Mother Language Institute’ which is fostering research and scholarly activities for the preservation of languages. We have taken steps to introduce primary education in mother tongues of various ethnic groups. Children of five ethnic communities are already receiving text books in their mother tongues. So far 132 schools are providing education in mother tongue”.

Ms María Fernanda Espinosa Garcés, President of the 73rd UN General Assembly delivered her opening remark at this event started at 10 am at UNGA hall while Evo Morales, President of the Plurinational State of Bolivia was the keynote speaker. Among others Mr. Liu Zhenmin, Under-Secretary-General for Economic and Social Affairs, Mr. Ernesto Ottone Ramírez, Assistant Director-General for Culture, UNESCO and four Co-chairs of the Steering Committee for the organization of the International Year of Indigenous Languages also delivered their statements at the event.

A Cultural performance was displayed by the Kwakwaka’wakw Dancers, a collective from the traditional territories of the Kwak’wala speaking peoples on Northern Vancouver Island, Canada. Two Ministers from Canada and Ecuador spoke at the event.