Bangladesh’s resolution on natural fibres adopted by consensus at the UN – “This resolution will pave the way for a stronger, effective and efficient ‘global value chain’ for jute and other natural fibre products. If the demand of jute and jute products increase in the global market, Bangladesh’s jute growers and traders will get competitive price” – Ambassador Masud Bin Momen 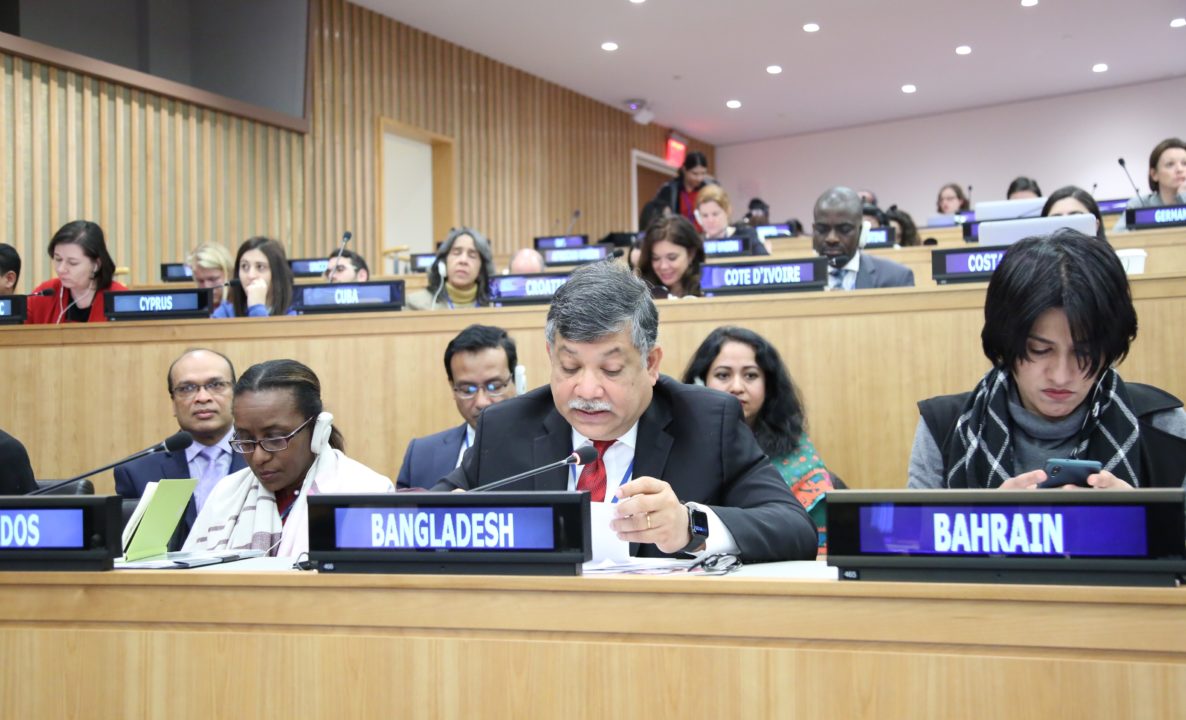 Today, Bangladesh’s resolution entitled “Natural Plant Fibres and Sustainable Development” has been adopted by consensus in the plenary of the Second Committee of the 74th session of the UNGA which was tabled in September 2019 in this committee. After several rounds of exhilarating as well as contentious negotiations, the Permanent Mission of Bangladesh could achieve consensus of all member states of the UN for this resolution. Along with India, China, Russia, Ireland, Canada, Indonesia, Singapore, Turkey, Egypt, Nigeria 68 countries have co-sponsored the resolution.

This is the first resolution in the UN General Assembly that features the challenges as well as the potential of Jute and other natural plant fibres as economically viable, socially beneficial and environmentally sustainable agricultural products. The resolution primarily focuses on jute and other natural fibers such as Abaca, Coir, Kenaf, Sisal, Hemp and Ramie which are lesser known to the international community and reiterates that the promotion of these fibres would contribute to the achievement of the SDGs.

During the adoption of the Resolution, the Permanent Representative of Bangladesh to the UN Ambassador Masud Bin Momen said, “Under the visionary leadership of Prime Minister Sheikh Hasina, the current Government of Bangladesh has been adopting bold policies aiming at transforming the agriculture sector, promoting rural development, empowering the marginalized people and protecting smallholder farmers and small- scale producers. In continuation to that, Bangladesh took the lead to highlight the potential economic, social and environmental benefits of the natural plant fibres such as Jute which is fondly called the Golden Fibre in Bangladesh”.

He hoped that this resolution will pave the way for fostering scientific research, development and cooperation at national, regional and global levels to ensure, in addition to its traditional use, the high end, value-added and innovative use of all lesser known natural plant fibres.

Ambassador Masud thanked the member states across the region for their support in adopting the resolution.

After adoption of the resolution, in front of the UNHQs Building Ambassador Masud briefed the journalists about how this resolution will help Bangladesh. In his briefing, he said, “This resolution will pave the way for a stronger, effective and efficient ‘global value chain’ for jute and other natural fibre products. If the demand of jute and jute products increase in the global market, Bangladesh’s jute growers and traders will get competitive price”.

In addition, he explained “Our objective is primarily to promote Jute. To bring all the countries on board, we have broadened the scope of the resolution which includes other natural plant fibres also such as Abaca, Coir, Kenaf, Sisal, Hemp and Ramie. We needed the support of the international community in our first ever attempt to promote Jute”.

The PR also said that this resolution will help addressing the environmental degradation and climate change issues by creating awareness globally of the disadvantages of artificial fibres such as plastic and the benefits of using natural fibres. It calls upon the governments to mainstream the promotion of the natural fibres into their policies, plans and laws.

From now on, the resolution will be discussed in the Second Committee of the General Assembly biennially.