Permanent Representative of Bangladesh presents her credentials to the UN 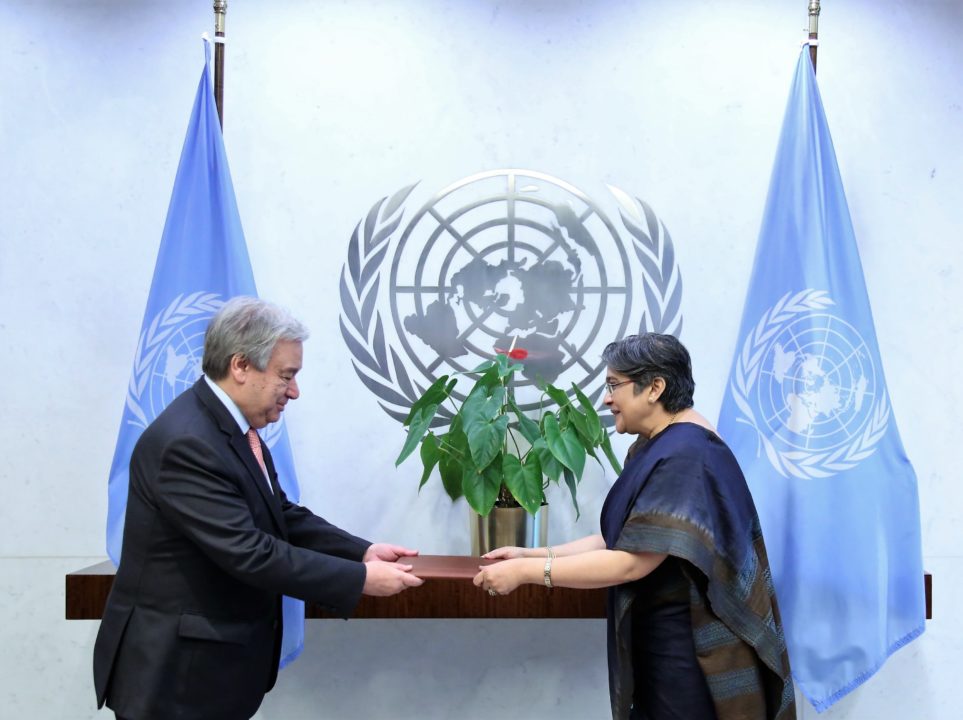 The Ambassador and Permanent Representative of Bangladesh to the United Nations Ms. Rabab Fatima presented her credentials to the UN Secretary General António Guterres in the UN Headquarters today. Prior to this on Friday, 29th of November she joined the Mission.

Rabab Fatima becomes the 15th Permanent Representative (PR) of Bangladesh to the UN since 1974 when Bangladesh became the member of the apex body under the leadership of the Father of the Nation Bangabandhu Sheikh Mujibur Rahman. She was Bangladesh Ambassador to Japan prior to this appointment.

After presenting her credentials the PR conveyed the greetings from the President and Prime Minister of Bangladesh to the Secretary General (SG). Mr Guterres termed Bangladesh as a friend of the UN, and lauded Bangladesh’s socio-economic developments under the leadership of Prime Minister Sheikh Hasina. He said Bangladesh is a valued member of the UN and is making an important contribution to the work of the global body.  The PR reiterated Bangladesh’s continued commitment and support to the UN and to the Secretary General’s initiatives and efforts.

SG mentioned Bangladesh’s remarkable contribution to peace operations as well as the reputation and professionalism of Bangladeshi peacekeepers.

The Permanent Representative and Secretary General also discussed about the Rohingya crisis, and SG reassured that he will continue his efforts towards finding an early and durable solution.

The Permanent Representative conveyed the invitation to the Secretary-General to attend the birth centenary of the Father of the Nation Bangabandhu Sheikh Mujibur Rahman starting March 2020, and shared that the occasion will be celebrated globally in a befitting manner.  Recalling the recent decision of UNESCO to celebrate the birth centenary, she said that Bangladesh plans to organize events and programmes with the United Nations in New York, and in this regard, she requested the Secretary General’s support.

Ambassador Rabab Fatima, a career diplomat, joined the Bangladesh Foreign Service in 1989 and she held important position in the Ministry of Foreign Affairs in Dhaka, and also served in Bangladesh Permanent Missions in New York and Geneva; and the Missions in Kolkata and Beijing in various capacities.

Ambassador Fatima has extensive experience and specialization in human rights and humanitarian issues. She has also served on lien with the Commonwealth Secretariat, London, as Head of Human Rights; and with the International Organization for Migration as Regional Representative for South and Southwest Asia.

PrevPreviousBangladesh’s resolution on natural fibres adopted by consensus at the UN – “This resolution will pave the way for a stronger, effective and efficient ‘global value chain’ for jute and other natural fibre products. If the demand of jute and jute products increase in the global market, Bangladesh’s jute growers and traders will get competitive price” – Ambassador Masud Bin Momen
NextUN observes 71st anniversary of Genocide Convention Ambassador Rabab Fatima raises the issue of 1971 Genocide in BangladeshNext
© 2023 Permanent Mission of the People’s Republic of Bangladesh to the United NationsDiplomat Centre • 820 2nd Avenue, 4th Floor • New York, NY 10017 • USA • (212) 867-3434
Facebook-f Twitter Youtube