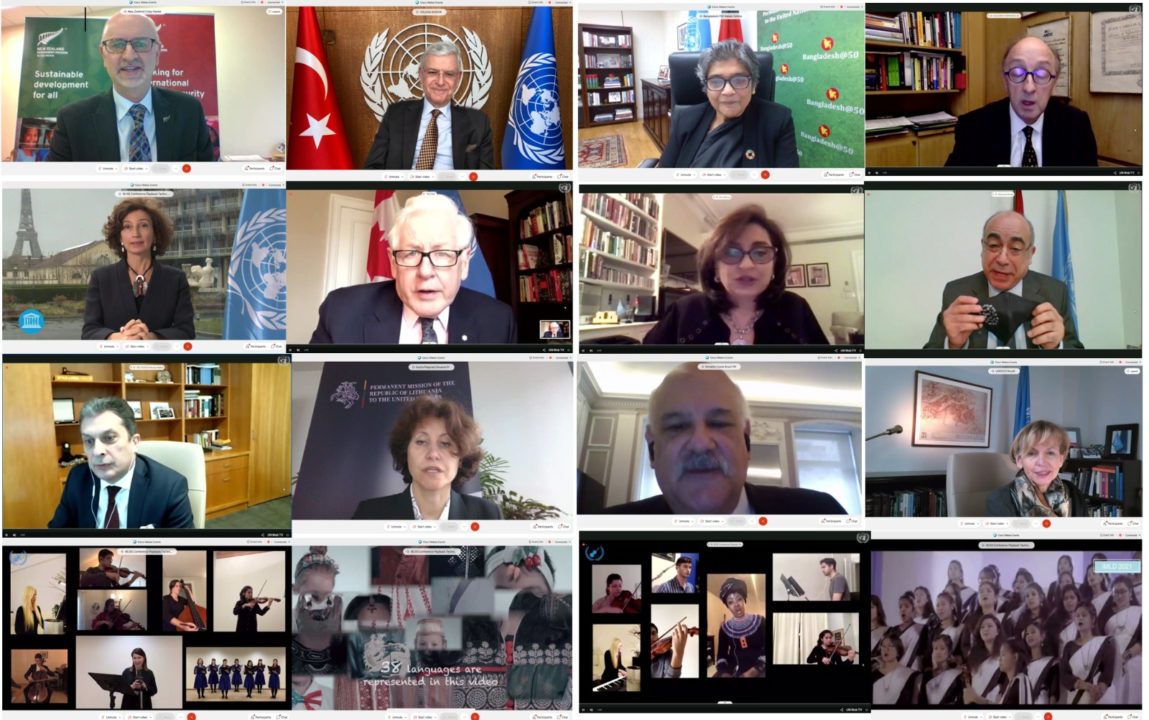 International Mother Language Day (IMLD) 2021 has been celebrated at the UN headquarters today. The event was co-organized by the Permanent Missions of Bangladesh, Brazil, Canada, Egypt, Jordan, Lithuania and New Zealand to the UN. Organized for the 5thconsecutive year, the event was also co-sponsored by the UN Secretariat and the UNESCO. Due to the COVID-19 related restrictions the event was held virtually and was telecast at the UN Web TV.

The President of the General Assembly Mr.Volkan Bozkir attended the event and delivered his remarks. Along with the Permanent Representatives of the co-organizing countries, the UN Coordinator for Multilingualism and the Under Secretary General of the UN Department of Global Communications shared their thoughts. A prerecorded video statement from Director General UNESCO and a message from the mayor of New York was presented during the event. The Permanent Representative of Portugal in his capacity of the Chair of the Group of Friends on Spanish language also spoke at the event.

The Permanent Representative (PR) of Bangladesh to the UN Ambassador Rabab Fatima made the welcome remarks and moderated the event. In her opening remarks, Ambassador Rabab Fatima paid deep homage to the language martyrs who made supreme sacrifices in upholding the sanctity of Bangla in 1952. “Their sacrifice eventually led to Bangla being given the status of State language” added the ambassador.She also paid rich tribute to the Father of the Nation Bangabandhu Sheikh Mujibur Rahman who led the language movement of 1952, and the subsequent national movements culminating into our independence in 1971.

Ambassador Fatima thanked the expatriate Bangladeshis whose initiatives led to the proclamation by the UNESCO of 21 February as the International Mother Language Day. She acknowledged with gratitude the crucial role played by Prime Minister Sheikh Hasina in this regard, and also for establishing the International Mother Language Institute in Dhaka for the preservation of the nearly extinct languages of the world. She reiterated the Prime Minister’s proposal to include Bangla as one of the official languages of the UN.

The President of the UN General Assembly Volkan Bozkirin his address thanked Bangladesh Permanent Mission for leading the observance of IMLD in the UN. He and other speakers acknowledged Bangladesh’s distinct role in the proclamation of International Mother Language Day by the UN and also lauded Bangladesh for its leadership in promoting mother language and multilingualism globally.

The speakers in their statements highlighted the importance of multilingualism particularly in the context of COVID 19 pandemic and stressed that preservation of linguistic and cultural diversities as a means of education and communications have become more urgent now than ever. They expressed support for using mother languages to promote understanding, tolerance, dialogue and social inclusion as the catalysts for sustainable development and realizing the 2030 Agenda.

The event included a multilingual cultural component. The UN Chamber Music society brought together three performances from different regions in the world, showcasing the power of music in promoting linguistic and cultural diversities. The performances included an opera from South Africa in an extinct language called ‘Khosa’, an instrumental by a French performer and a tribute to Tagore by a Japanese artist.

In addition to that the theme song of the IMLD and language martyrs’ day, “amar bhaiyer rokte rangano ekhushey february” was performed in multiple languages by the students of the Asian University for Women. The celebration ended with a short video message in 38 different languages from the students of United Nations International School.

The virtual event was full to its capacity with the presence of senior diplomats of a large number of member states, UN officials, media personalities and civil society representatives.