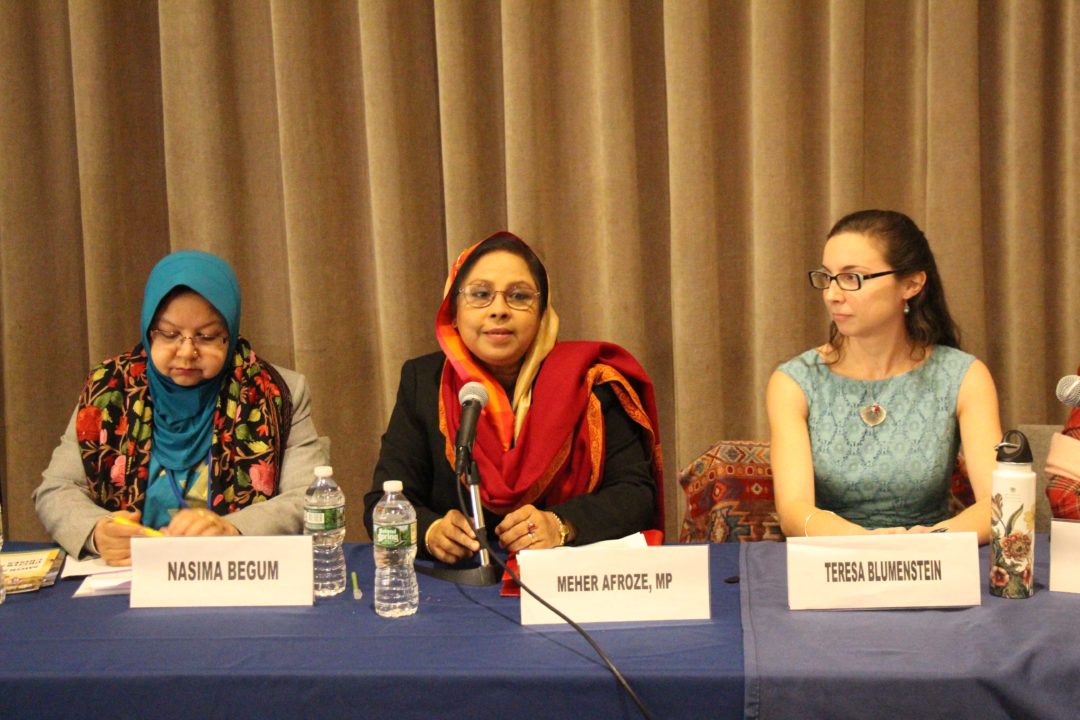 “We urge the international community to step forward and share the burden. They should be taking greater responsibilities arising out of the adverse impacts of climate change particularly when rural women and girls are at stake more than other groups of population”, said Meher Afroze MP, Minister of State, Ministry of Women and Children Affairs at a side event hosted by Bangladesh entitled “Shouldering the Burden: Rural Women and Climate-Induced Displacement” at UN Headquarters, today at the side-lines of the ongoing 62nd Commission on the Status of Women (CSW). The event was also co-sponsored by ‘NGO Committee on Migration’.

Her statement, the State Minister quoted Prime Minister “We have to realize that climate change is not a problem of the future, it is already happening in our lifetime; so take action today”.

As a Panellist of the event, State Minister Meher Afroze described about the adverse impacts and vulnerability of climate change in Bangladesh. She also shared the government’s strong commitment, initiatives & preparedness to face the threats of climatic challenges. In this context, the State Minister mentioned that Bangladesh government has also been implementing various projects like ‘Ashrayan’ and ‘One Home One Farm’ to support the people who lose their homes due to climatic conditions. She added that awareness-raising and training programmes were being conducted to cope with the post-disaster situation and facilitate return to livelihood.

“To provide safe drinking water and sanitation in cyclone prone areas, my Ministry have been implementing projects for women and children under Social Protection programme”, she said.

Upholding the proactive role of Prime Minister Sheikh Hasina and recognizing her as an early adopter and advocate of climate change discourse and recalling that she is the recipient of the ‘Champions of the Earth’ award, the State Minister said, “Under the visionary leadership of Sheikh Hasina the government of Bangladesh has been trying to update relevant legislations and formulate new ones to mitigate the climate change vulnerability”.

State Minister recognized the support of development partners, NGOs and private sector in this regard. She urged upon the international community to extend their support to build capacity for the developing countries like Bangladesh in line of adaption, mitigation and preparedness against the adverse effects of climate change.

Referring to her recent visit in Rohigya camps in Bangladesh UN Under-Secretary-General and Executive Director of UN Women Ms Phumzile Mlambo-Ngcuka another panelist, praised Bangladesh government and its people for their generosity in hosting Rohingyas and for providing them with humanitarian support. She also particularly praised the women of the host community in Cox’s Bazar for their resilience. In regard to Prime Minister Sheikh Hasina’s efforts in sheltering the Rohingyas, the State Minister recalled the recognition of Prime Minister as the ‘Mother of Humanity’.

All panelists praised highly the significant socio-developments of Bangladesh, in particular in women’s empowerment. They said that the resilience of the women of Bangladesh in fighting against disaster and climate change vulnerability was really praiseworthy.

Secretary of the Ministry of Women & Children’s Affairs of Bangladesh Ms Nasima Begum, Director of Food & Agriculture Organization Liaison Office to the UN in New York Ms Carla Mucavi, Co-founder of ‘Open the Door’ Ms Molly Gerke and Thematic Specialist from International Organization for Migration Ms Mariam Traore Chazalnoel were also attended the event as panelists while Ms Teresa Blumenstein from UNANIMA International and NGO Committee on Migration was the moderator.

The delegation of Bangladesh for the 62nd CSW including Kazi Rosy MP were present in the event. The panel was also attended by a large number of delegations from member States, UN officials and Civil Society representatives.