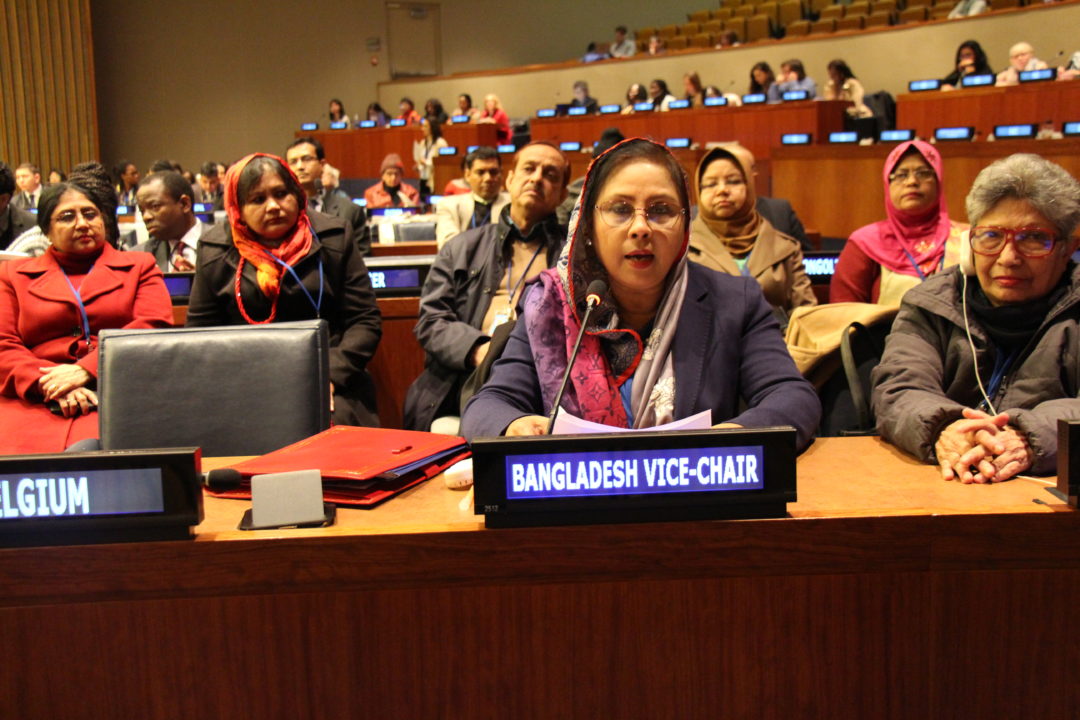 “Bangladesh government has adopted an inclusive approach for women development where NGOs, civil society and other stakeholders are complementing government’s efforts. We also need greater support from the international community particularly the United Nations in this regard” said Meher Afroze MP, Minister of State for Ministry of Women and Children Affairs at the General Debate of the ongoing 62nd Commission on the Status of Women (CSW).

The State Minister said, “The Father of the Nation, Bangabandhu Sheikh Mujibur Rahman started the process of uplifting the status of women as a Constitutional obligation. Subsequently, under the visionary leadership of Prime Minister Sheikh Hasina, Bangladesh has made remarkable progress in women and children’s development. According to the Global Gender Gap ranking 2017 prepared by World Economic Forum, Bangladesh jumped up 25 notches to 47thplace in terms of gender equality and has again topped South Asia”.

In her statement, the State Minister enumerated the various measures taken by the present government to ensure women’s empowerment in Bangladesh such as policy intervention, social safety net, livelihood training, access to micro-finance and SMEs for promoting women’s entrepreneurship, women-friendly banking system and projects for promoting and protecting girls. She also mentioned the signature projects such as ‘Ashrayan’, ‘One Home One Farm’, ‘Joyeeta’ as well as various incentives and allowances to support Bangladesh’s rural women.

The State Minister said, “Due to such initiatives, our rural women are getting integrated in our mainstream socio-economic activities and gradually coming out of extreme poverty. In January 2018, Bangladesh received 34th ranking in World Economic Forum’s Inclusive Development Index’s list of emerging economies, again topping in South Asia”. From the highest political level down to the grass root, we have a greater participation of our women that was manifest at Bangladesh attaining 7th position among 155 countries in the political empowerment category, she added.

The State Minister also raised the ongoing Rohingya crisis in her statement saying, “Majority of the forcibly displaced Myanmar’s citizen camped in Bangladesh are women and children. We need to work on addressing these challenges”.