Launching of International Water Decade – Shared responsibility is needed to create a water-secure world for all – State Minister of Foreign Affairs Md. Shahriar Alam MP says at the UN. 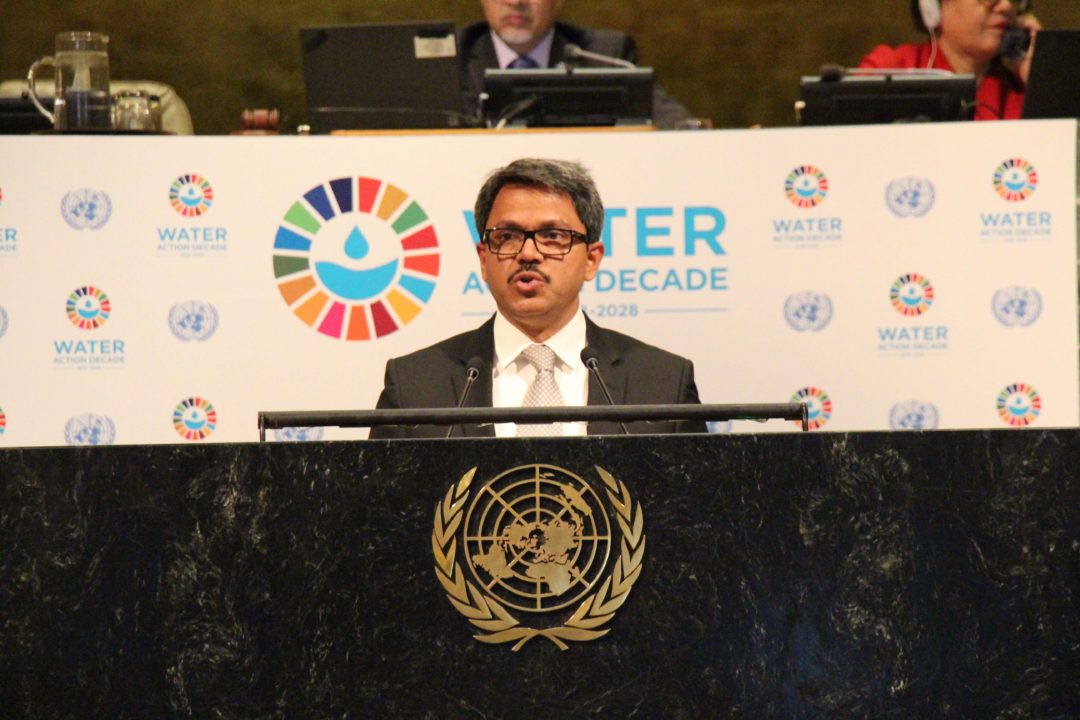 “To implement the water action under SDGs, to make international water decade a success, and to create a water-secure world for all; shared responsibility, sincere efforts and strong cooperation at regional & global level and private sector are needed” –State Minister of Foreign Affairs Md. Shahriar Alam, MP said today at the UN Headquarters at a high-level event entitled “Launching of the International Decade for Action: Water for Sustainable Development (2018-2028)”. This decade was launched on the occasion of the ‘World Water Day’ being observed worldwide today. He also said, “We are confident that the International Water Decade will provide us the opportunity to put our acts together to change this scenario”.

State Minister Shahriar Alam is representing Prime Minister Sheikh Hasina who is one of the members of the UN Secretary General’s High-level Panel on Water, at the event. As a member of the high level panel Bangladesh’s Prime Minister had urged, “The leaders around the globe to count our call for urgent actions to understand, value, manage, and invest the best in water for the prosperity to whom we owe our present”.

Mentioning that water and environment remains at the center of the development priorities of Prime Minister Sheikh Hasina, the State Minister said, “Under the visionary leadership of our Prime Minister, Bangladesh has earned global recognition as a champion for ensuring safe drinking water and sanitation for all. We always emphasized that proper management of rivers and water resources is closely linked to all sorts of development of Bangladesh. In a country of more than 160 million people, nearly everyone can access safe drinking water. Now, our target is to ensure direct access to safe drinking water for all by 2020”.

He underscored the importance to the implementation of the SDG-6 in Bangladesh in his statement and said, “Our government has initiated a 100-year exemplary plan titled ‘Bangladesh Delta Plan-2100’ for the coordinated water resources management. The government has allocated huge amount of money for implementing massive water related projects including for desalination, rainwater harvesting, and dredging”.

The High-Level launching event was convened by the President of General Assembly Miroslav Lajčák. The President of Tajikistan and a member of Ministers of other countries attended the High-level Launching. Among other speakers, the Executive Director of UNICEF in her statement acknowledged the water and sanitation related program achieved in Bangladesh. She also mentioned Bangladesh Government’s and UNICEF’s efforts in providing water & sanitation services for the Rohingys in Cox’s Bazar. Besides, the State Minister also joined the High-Level Luncheon event jointly hosted by the President of General Assembly and Under-Secretary-General of ECOSOC.